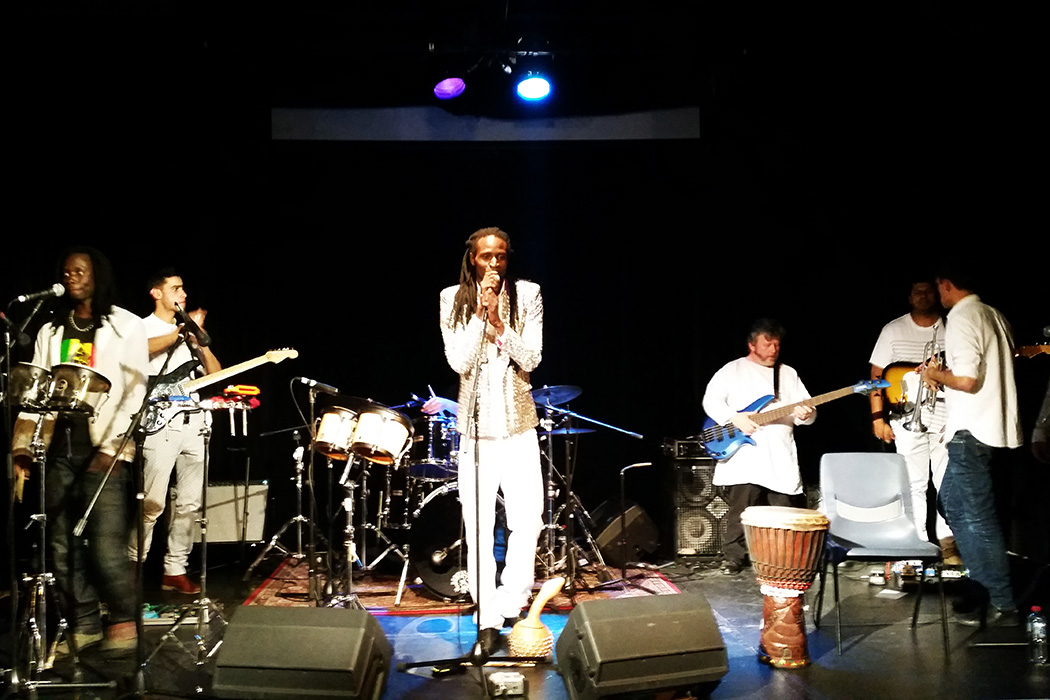 The sound of saxophones, trumpets, keyboards and drums filled the Nexus Arts centre in Adelaide on September 6 for a night filled with afro-descent inspired music. The dance floor crowded with a mix of cultures.

Lamine Sonko, a Senegalese musician, lead the African Intelligence, an eight person band dedicated to raising awareness about Africa and African History through genres of music including Salsa, Reggae and other styles that originate from Africa and the African diaspora.

Salt Magazine caught up with Sonko before his performance for a chat about his music and experience in the diaspora as a musician.

‘We call the band The African Intelligence, to show that Africa has a very profound history and that history has been taught to us through our elders. It has been passed through generations,’ said Sonko.

The band is currently in the process of releasing an album. Describing their songs as ‘Roots Music’, Sonko said the band perform in native West African languages including Mandingo and Wolof as well as French, Spanish and English.

‘The type of music I play comes from being in Africa and hearing the music of our ancestors echoing back with new sounds and ideology and that’s what this music is about,’ said Sonko.

Lamine Sonko arrived in Australia in July 2004 to study at the Victoria College of the Arts (VCA). His move was a result of his desire to further his own cultural development having come from a family of storytellers and musicians.

In his solo career, Sonko plays acoustic instruments and tells stories, mainly inspired by his travels from Africa. He released an album in 2010 and has performed in international music festivals in France, USA, the Asia Pacific region, Australia’s own WOMAD as well as many African nations.

While Sonko’s shows are well attended, Sonko acknowledges that the audience often lacks members of the African community which he finds slows down his goal to empower the diaspora. However, through community outreach, he has engaged in a number of initiatives to unite and encourage the African community in Melbourne.

This includes the One Africa concert at Melbourne hall, which brought members of a number of African communities together and included a choir of 350 people singing traditional African songs.

He is also involved in resettlement programs for new arrivals as well as other and outreach programs.

Sonko stresses the importance of discovering one’s own stories and telling those rather than mimicking the popularized style of American storytelling. He also spoke of the history of hip hop.

‘If you understand history, you will know where hip hop comes from, they’re doing something African. In Africa they call it taso.’

Sonko believes that learning one’s own roots should include learning and understanding the roots of others.

‘We must have passion and also have respect toward the country that we occupy, knowing that it has important roots to the indigenous people,’ said Sonko.