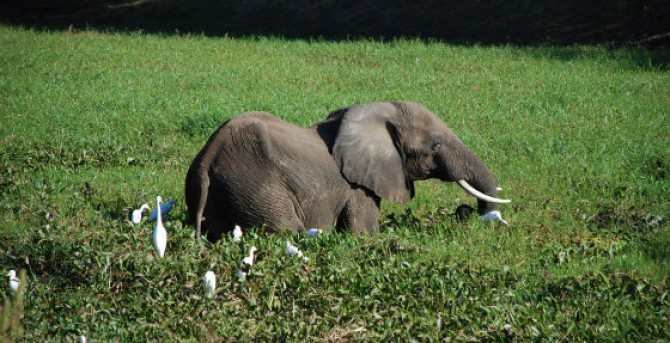 By Lisa Carrick from NSW, Australia

We are going on safari! It would include three weeks of travel though Zimbabwe with the final destination Mana Pools, the World Heritage site that sits on the Zambezi. Unlike the other National Parks on the itinerary, here we could disembark our vehicles and camp fence free. Surely this must mean the animals in the north were a more friendly type of wildlife. Right?

For Derek this was a return to his much loved Zimbabwe, for me it was a whole new experience; embarked on with excitement and a healthy dose of anxiety.

To put this into perspective I have never been to Africa. I have never camped, and certainly never where the local wildlife had the potential to eat me. I would be more comfortable to meet a kangaroo in a dark alley, better still a koala. But Africa is a whole different kettle of flesh eating fish.

After an enjoyable week in Bulawayo our first stop was Hwange National Park where I felt an overwhelming sense of awe at the plethora of wildfire seemingly forming a guard of honour as we drove in; Giraffe, kudu, impala, elephant, and zebra. All these animals right there in front of us and without the narration of David Attenborough.

This awe dissipated somewhat at the site of our ‘secure’ camp. The camp we were forbidden to leave after dark for our own safety. I couldn’t quite comprehend how an elephant, lion or anything hungry would struggle to breach that sad excuse for a fence. On the upside there was someone there employed to watch over us and they did the dishes. That’s a tick for camping.

After cutting my teeth on camping at Hwange we had a reprieve to experience the power of the mighty Victoria Falls. I still maintain my preference would be to camp in the wild than bungee jump off that bridge.

Our trip to Mana Pools was punctuated with the breathtaking vista from a camp perched at the edge of Chizarera and the luxury of Bumi. Thanks to the cancellation of a wedding we had Bumi to ourselves and were made to feel like family; a bed, a bathroom running hot water, a restaurant, a bar and a cheeky guide to entertain and take us on our two ‘activities’ each day. Just a little feedback to the local tourism operators, game watching, fishing trips and a village tours for some are deemed as an activity, for others a manicure and facial is also considered an activity and as such should be included in the selection.

But I digress. I am meant to be talking about the friendly animals in Mana Pools.We arrived just prior to the cut off time and made our way straight to camp. Ok, so now this is camping for the big kids. Our camp was under two magnificent trees, large enough to stretch up and around our little ensemble of vehicles, tents and fire. The clear Zambesi River flowed with a sandbank island dotted with hippos. And there we shared its banks with hippos and crocodile; without even a poor excuse for a fence.

To assist us in the navigation of Mana Pools we hired two guides, Dave from Harare and Lovemore a Mana Pools local. We met Dave on our arrival at the park main entrance and once we got over the fact our guide, who was set to camp with us, actually set up camp at the wrong site, we were ready for our first Mana Pools adventure the following morning. 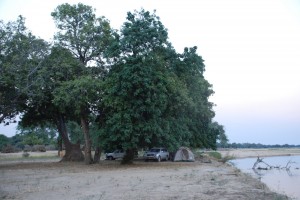 We were finishing our morning coffee when the serenity of the running river punctuated by the hippos expelling their held breath as they surfaced was interrupted. Dave and Lovemore arrived with a mechanical clatter of the open top jeep with the stadium back seat and a requirement to be hot wired to start.

Jeremy, Susan, Derek and I were set to take our first walking tour in the national park. We were given strict instructions. No fast movements, no loud noises, stand your ground if approached by an animal and stay behind the guide. I had full confidence that Dave and Lovemore knew what they were doing. It was explained to me that guides undergo intensive training and accreditation; plus Lovemore had a massive gun. 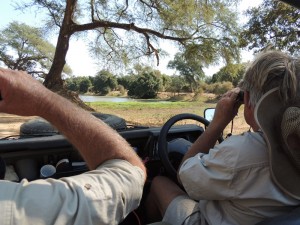 We rambled through the park in the jeep. It was astounding how the open top jeep made such a huge difference to your field of view and sense of immersion. This was fun. Right?

Soon after we started our little adventure Dave spotted an elephant keeping company with a congregation of egrets in a lily covered pond. At a distance Dave unwired his jeep and we stepped out for our first walking interaction. 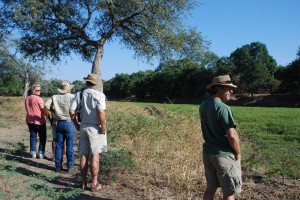 No sudden movements, no loud noises, hold your ground and keep behind the guide. Got it?

We slowly walked to the riverbank and used a tree as a little camouflage. And there, not 50m away, a young bull waded, relaxed and chilled; then we caught his attention.

Slowly the elephant raised his head. His ears pricked, his trunk went up periscope style and with a curious tilt he turned his head. This was absolutely amazing. What great shots I was getting.He seemed a willing model with a well-practiced drop of the shoulder and pirouette to face his appreciative audience. We even had a little catwalk moment as he turned sending the egrets gracefully to flight, and lilies parting as he walked through the water out of sight. 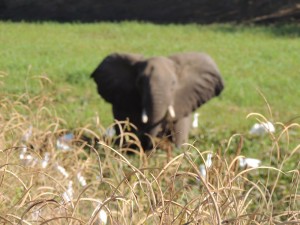 I fumbled with my camera to see if I got the shots, and thought how lucky I was to see Zimbabwe, and to have such a close encounter with amazingly graceful animal. It was then the mood shifted in the group.

In slow motion we turned to the left. Our catwalk model had sauntered out of our view, up the riverbank to pop out on the other side of the tree we were using as cover.

Out of the water our bull elephant seemed far less serene, and a whole lot larger. His ears flapped and stance extended as he stepped towards us. What is going on? Where is David Attenborough’s calm voice to explain what is happening? And then in the corner of my eye I see the movement of Lovemore’s gun being raised, quickly followed by a loud holler from Dave waving his hands at our elephant assailant. 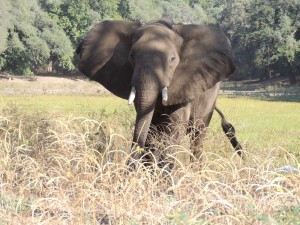 It worked. The elephant stopped in his tracks, hesitated and then turned to trot away.

Jeremy the equine surgeon and adventurer quickly grabbed my wrist and gently took my pulse. “Lisa, you are as cool as a cucumber!” What I didn’t have the heart to tell Jeremy is that my brain, my eyes and my underdeveloped primal instinct were still in a meeting debating on what just happened and how we were planning on responding; as such no reactions had been implemented.

Dave explained that the elephant was a teenager and most likely embarrassed by his retreat, so he may come back. This news helped with the real pulse reaction. Thank the greater he didn’t come back. 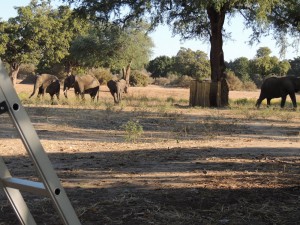 This amazing experience hasn’t given me a fear of elephants. I had the chance later in the next day to be on my own at camp. As the day was ending I sat in chair and watched a family of elephants slowly mosey up the river through the camp and silently pass by. It occurred to me, they say elephants have long memories. But I bet I will remember our model elephant for longer than he will remember us!

I was right to trust the skills and experience of our guides. Dave and Lovemore may have had some quirks but when it counted, they had it under control. However, I did question their judgement to go for a walk to find lions. I thought, “and what do we do, when we find them?”

This post was written by Lisa Carrick from NSW, Australia and was originally published here on Susan Hubert’s blog. Susan is an author, based in Bulawayo, Zimbabwe.

PHOTO: Federica Roselli Photography ASANTI DANCE THEATRE – ADELAIDE FRINGE DEBUT The heat is on, the stage is set, and as the city braces…