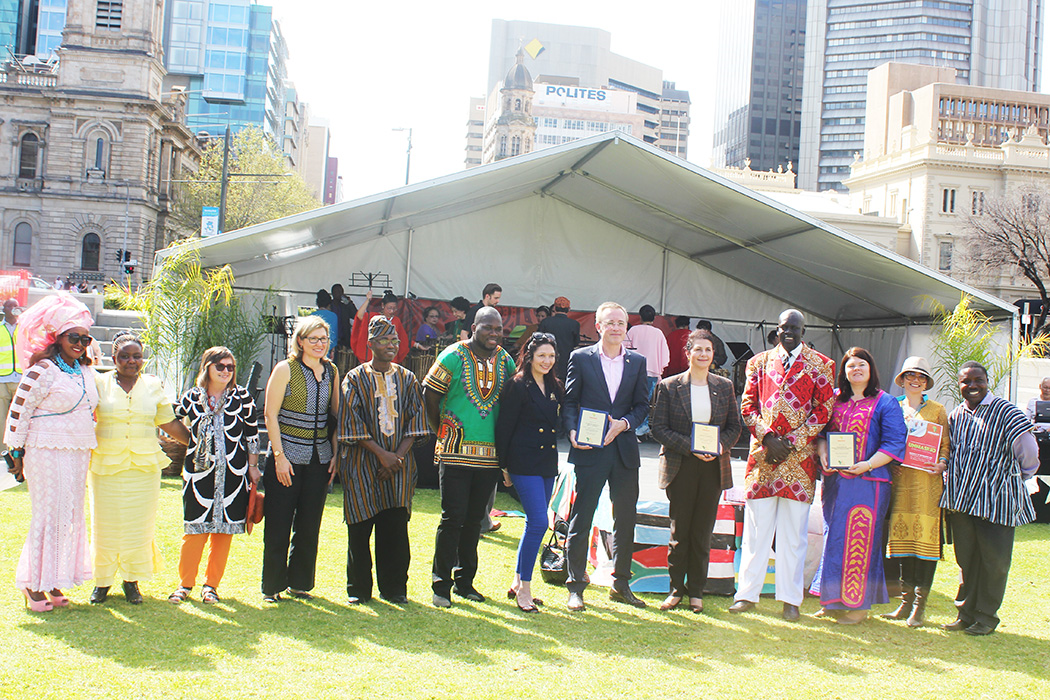 The heart of Adelaide – Victoria Square was pulsating to African rhythms as South Australia’s African community converged on the city center to display their music, arts, crafts, traditional dresses and flavorsome dishes over the weekend Saturday 12 September 2015 to celebrate the annual Unmasked African Festival.

Members of Parliament, local council representatives’, community organizations and people from all walks of life were present for the opening ceremony launched by His Excellency the Honourable Hieu Van Le AO, Governor of South Australia and Mrs Le.

There was never a dull moment as local artists and dance troupes took turns to wow those in attendance with skillful and graceful performances while Miss Africa South Australia contestants strut their stuff on stage, wearing colorful traditional African dresses.

Donning a traditional African outfit for the occasion, The Minister for Multicultural Affairs the Hon. Zoe Bettison thanked the event organizers citing the important role the festival plays in bringing South Australia’s diverse African community together and showcasing African culture.

The Minister said the South Australian Government is proud of the contribution of its diverse cultural communities and is delighted the State Government continues to support this important event.

“We want South Australia to become a place where diversity is not just accepted, but highly valued and embraced” she said.

Talking to Salt Magazine after the event the Chairman of the African Communities Council of South Australia Mr Mabok Deng Marial said the day was a very beautiful day. “The weather was really good, there was no rain to interrupt people and the organization was much better than last year.”

He said the festival is improving every year. “As I said in my speech it is going to be one of the biggest festivals that South Australians are going to enjoy for a long time and every year it will grow and grow and grow”

Orchestrating and putting together a festival can be challenging so we spoke to the festival Director Reagan Bledee and asked him how he managed to pull it off. Reagan said it has been a hectic couple of weeks finalizing the arrangements and making sure everything is in place. “I was here this morning panicking about the stalls wondering whether it’s all correct” with a sigh of relief he said “it all worked out well and now I can relax”.

It was indeed a memorable event and Salt Magazine would like to thank the African Communities Council of South Australia and the event organizers for having us as sponsors of such a successful event and we look forward to next year’s festival.

Keep an eye out on our facebook page to see all the pics from the day!