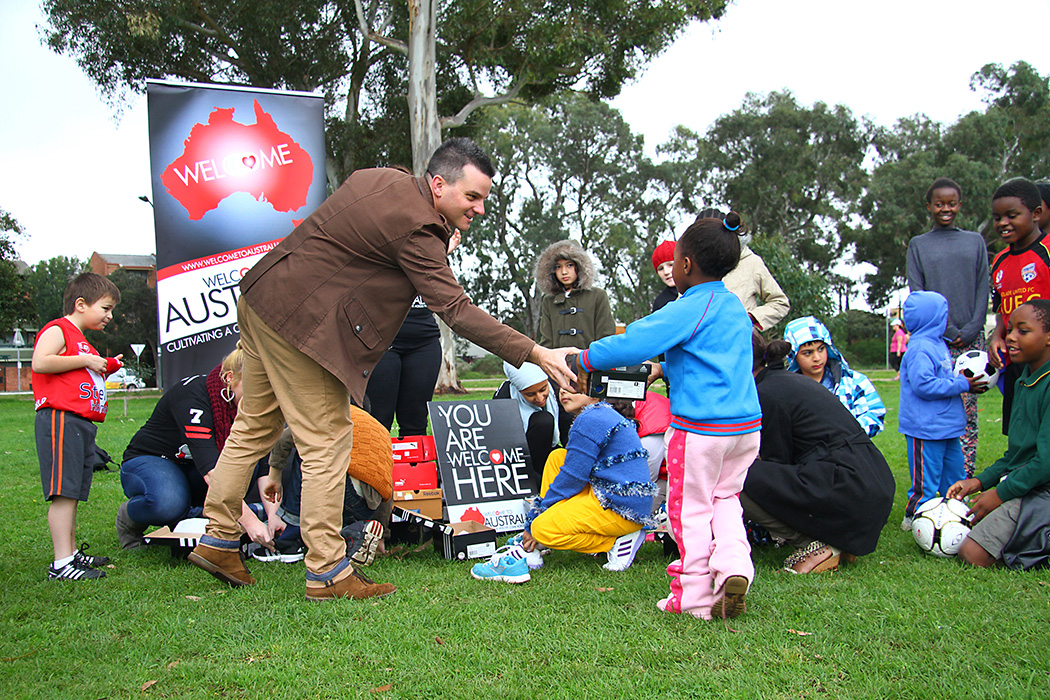 A number of rallies have recently been held across Australia over claims that Muslim groups want to change Australia’s cultural identity.

In Adelaide, the Welcome to Australia organisation has stood by the Muslim community in stark contrast to Reclaim Australia activists.

SALT Magazine spoke with the founder and National Director of the Welcome to Australia campaign, Brad Chilcott, and gained an insight into his motivation for supporting and representing minority groups.

Brad said it was a protest sign that gave birth to the Welcome to Australia group. “I saw it when locals in the community were protesting against the opening of the now defunct Inverbrackie Detention Centre. They weren’t protesting against the Centre but against having asylum seekers living near them; and the sign said ‘Sink the boats’. When I saw that, I decided that’s not the Australia I want my kids to grow up in where it’s socially acceptable to have a child hold a sign that wishes people to drown at sea.”

Brad said he and some of his friends thought about the divide as it stood at the time and decided to create a positive voice that reflects the true value of the Australia they know – thus the Welcome to Australia organisation was formed.

“Financing the group has always been a problem, and we have to rely on volunteers who come and go for various reasons,” he said. “Another challenge we face is finding a balance on how to achieve our goal which is to advocate on behalf of people from refugee background. People often want us to be not so positive, to be a bit more like traditional angry activists, and we have to manage and resolve that. For us there are other organisations using that method, and they are doing well; but for me it’s how we can frame it in a way that people who are disengaged or who don’t care can be attracted to get involved.”

He said the annual Walk Together event provides him with moments of satisfaction when people tell him they never go to protests and marches, but they care about this issue and want to engage in it in a positive way.

“The Walk Together campaign gives them a chance to do just that. That’s awesome to me. It’s really about the relationship I have formed with asylum seekers and refugees. I learn so much more about different cultures and stories that I would have never learned otherwise.”

According to Brad, he would like responses to instances of prejudice and cruelty to reflect the society we are hoping to build.

We asked Brad about the argument that people are welcome to this country providing they conform to Australian values.

He said, “Anyone who becomes a citizen has the responsibility to respect the law. People making those arguments act as if culture is a static moment in history whereby we behave as we used to in the 1950s or in the 1920s. What it means to be Australian is something that has shifted and continues to shift as time goes on. Our commitment to the law and to be citizens within that law should unite us – not the idea that we all need the same religion or cultural expression.”

In response to a question about how the African community specifically should deal with racism, Brad responded that in his view it was up to African community leaders to encourage their members to build relationships outside of their own communities because prejudice doesn’t survive personal friendships.

“When you meet someone and build a friendship with them, those things starts to break down. The Government has a responsibility to use words and choose words that say racism and prejudice are not part of Australia. The goal of Welcome to Australia is to achieve a day when prejudice is unpopular, and if governments try to use fear as a tool for gaining support, no one listens – and it hurts their chances rather than improving their popularity.”

Sadly however, he ended by saying, “I think that’s a long way off. Fear and division has proven in Australia to be an effective campaign tool. I want to reach a stage instead where people measure leadership in compassion and generosity and inclusion rather than in cruelty and fear.”

SALT Magazine has total respect for Brad’s convictions and his campaign to make Australia a better place for all.