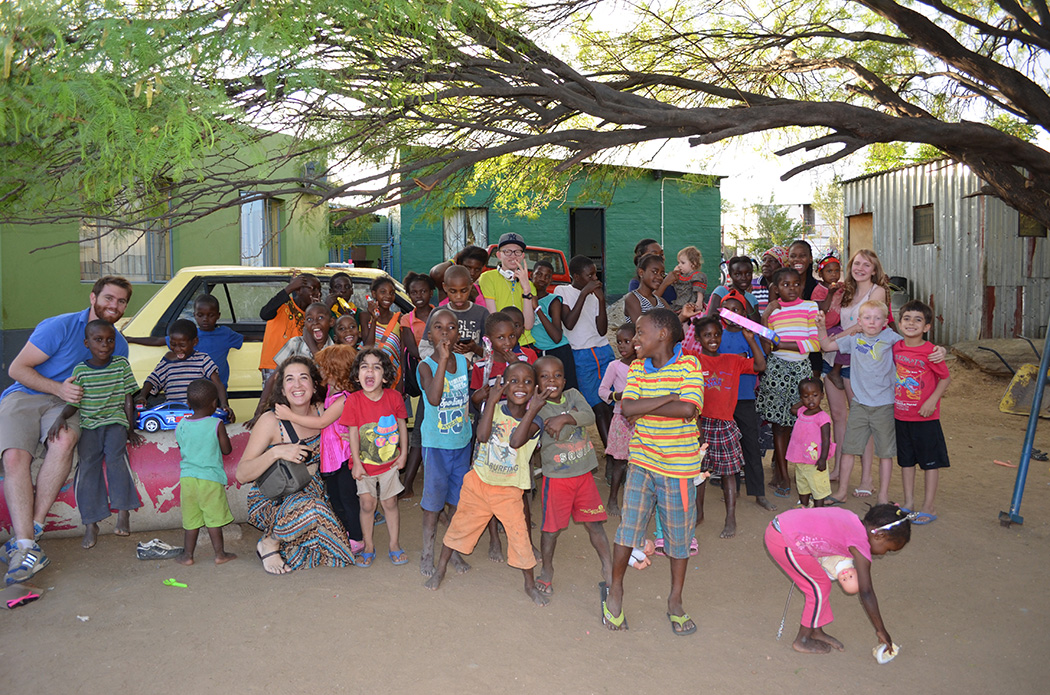 As a result of our move to Namibia we have found a small orphanage in the low socio-economic suburb, Katutura, called Megameno Home. The word “Megameno” means “PROTECTION” and this is literally what it offers to its young residents.

Since 1998, Meme Maria Shalukeni opened the doors of her two bedroom home to abandoned children and the children of relatives who were unable to care for them. Even though we know that she currently provides housing for 29 children, it is never clear how many children we are going to meet during our weekly visits as Megameno is also a refuge for multiple kids from the neighbourhood who stop by to play or get a much needed meal. Officially 29 (aged between 1-19) live at the orphanage, 2/3 of them are enrolled in school and rumoured that 2-3 are HIV positive themselves.

In 2007 with the assistance of international volunteers Megameno raised sufficient funds to build an additional 2 bedrooms and bathrooms at the back of the house. From what I understand of what it used to be to what it now offers – the conditions have improved immensely. Despite this and the fact that all children now have a roof over their head and someone who cares for them dearly, so much more is needed to ensure these children are provided a safe and stimulating environment which will encourage them to grow to be confident, ambitious young leaders. Government regulations are currently putting pressure on Meme Maria to replace the wire fence around the property for a brick fence, with the potential threat of closing down the home. This is only one of the current issues Meme Maria faces.

While we try to meet with stakeholders and look at some of those “big issues” and how we can attempt to tackle some of them in 2014 we decided that ensuring the children have a Christmas, a special present which was specifically chosen for them would be a great way to make them feel loved. We took photos of the children, created 1 page profiles and sent them to some of our friends and family from Australia in the hope that they would like to “adopt a child” and become a SANTA to them.

I cannot even begin to explain what happened next. I was literally bombarded with messages of friends asking (for once it wasn’t ME asking)… THEY were asking me to become SANTAS. Within 2 hours of when I first sent out the profiles we found 30 santas. Joy, excitement, sadness and a huge amount of gratitude filled my heart and my soul.

The next 2 weeks were busy trying to find the gifts that each child had told us they would like to receive from Santa. I quickly realised being an “ELF” was hard work… Eventually all items were ticked off the list, Phew! Next task was wrapping them up and booking a day to hand them out.

The feeling of being involved in this little project was indescribable. When we gave the 29 children and Meme Maria their gifts, amongst all the laughter, tears, hugs, wrapping paper, ribbons and lollies – I found myself realising that the luckiest one of all was me.

I was given the privilege to meet these children and their carers and be inspired by their stories and what they do every day.

I was able to connect with all the incredible and generous friends and family that I have.

I was reminded of the power of love!

African Australian girls gear up for the Miss Africa Crown

It’s that time of the year again when the hunt is on for Miss Africa – South Australia, to follow in the footsteps of…