Eritrean-born, but now Melbourne resident, Michael Adonai recently launched his second exhibition ‘Aware’ in collaboration with the Footscray Community Arts Centre in Melbourne as a part of Refugee Week 2015, and is currently working on his third upcoming solo exhibition.

His painting experience spans three decades, and his work has been exhibited in the US, UK, Japan and Sweden, as well as in Australia.

The unmistakable power of his painting had him recognised as one of Eritrea’s most sought-after artists, winning awards and prizes that included the Raimoq Award, one of the highest national prizes given to an artist. He was also nominated to represent Eritrea in the United Nations-sponsored Global Art Exhibition in 2001, and was the recipient of the African-Australian Excellence of the Year Award of 2014.

SALT Magazine spoke with Michael over the phone from Melbourne to talk about his painting and share his story with our readers.

Michael said he grew up following in the footsteps of his older brother, a renowned Eritrean painter; and in the midst of conflict in his homeland, he evolved his painting skills using bold and colourful images to depict not only the plight of his people, but also their hopes and aspirations.

His passion for the Arts and support from his friends and family kept Michael going in spite of the odds against him. In Australia he has received positive reviews on his work, which has further encouraged him, knowing it is been recognised and appreciated for its elegance, colour and depth – an appreciation proven by the steady sales of his works. 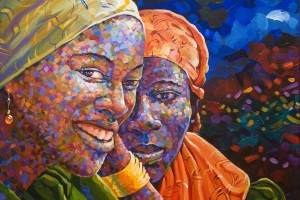 Michael said it was very difficult for him to point out a favourite from among his paintings.

“They all tell a different story, visually translating my cultural views. Recently I have used paintings to portray the plights of asylum seekers and refugees.”

Currently preparing for the next exhibition Michael said he would like to continue sharing his art with the world. However, while his family remains in Eritrea, he also has to devote time to try to bring them here as well.

“It is a big challenge,” he said. “I miss my family and it is hard to be separated from my loved ones.”

His parting message for people coming to Australia is that they contribute meaningfully to the society.

“We are not here only for protection, and we must also try to give back something.”

We are grateful for the time he gave to share his story, and we urge our readers to look up his work – www.michaeladonai.net