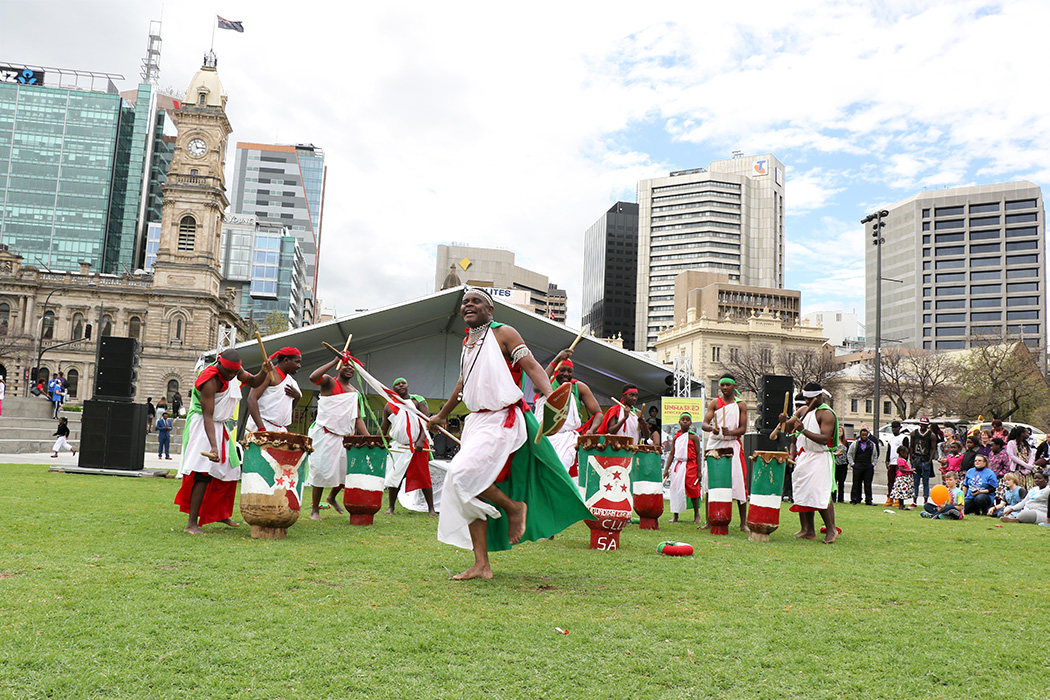 Despite the dreadful weather predictions, the sun shined down on Victoria Square for the most part of Saturday 17 September – the Unmasked African Festival. We’re not sure if it was African Juju or just sheer luck.

The African Festival in South Australia has continued to grow each year. In its fifteenth consecutive run, this year was a two day celebration starting off with a dinner at the African Village Centre restaurant followed by the festival in Victoria square, the heart of Adelaide city.

The dinner was attended by the His Excellency Hieu Van Le, Governor of South Australia, the Minister of Multicultural Affairs Hon Zoe Bettison, African community leaders and stakeholders.

In her speech the Minister lauded the event organisers for their voluntary work and pledged the Government’s continuing support for the event.

Addressing the crowd at the festival the chairman of the African Communities Council of South Australia Mr Mabok Marial thanked the African communities for coming out in numbers to support the event and acknowledged its social benefit in bringing people from different parts of Africa together. He implored the community to continue working together.

The festival director Reagan Bledee said the thousands of people in attendance is a testament to the hard work being put in by the organising committee. “I want to say thank you to everyone for braving the weather, we nearly have four to five thousand people in Victoria Square today which is fantastic and fabulous, it doesn’t matter whether it rains or shines, people are prepared to celebrate our culture, we brought Africa to the centre of Adelaide today,” said Reagan.

Reagan also thanked Salt Magazine for their partnering role. “You guys have been a great partner in terms of getting out all our graphic design on time and managing our social media,” he said.

Talking about the festival, Liberian community member and cultural performer at the event Emmanuel Zaza said it is one of the best days for the African community in Adelaide. “It’s great to have the kids here … having fun and this is why we do it … to promote the image of Africa”.

The African Police Liaison Officer Juma Abuyi said the event has come a long way since 2008. “This event, it is completely different, it’s in the next level now, I think it should be done two times a year”.

Salt Magazine thanks all the event organisers and we look forward to the 2017 Unmasked African Festival.

PHOTO: Sidique Bah. See all the photos on our Facebook page here.

Understanding one’s history is an integral part of self-actualisation, especially for young people living in the Black-African diaspora. When you live in a country…