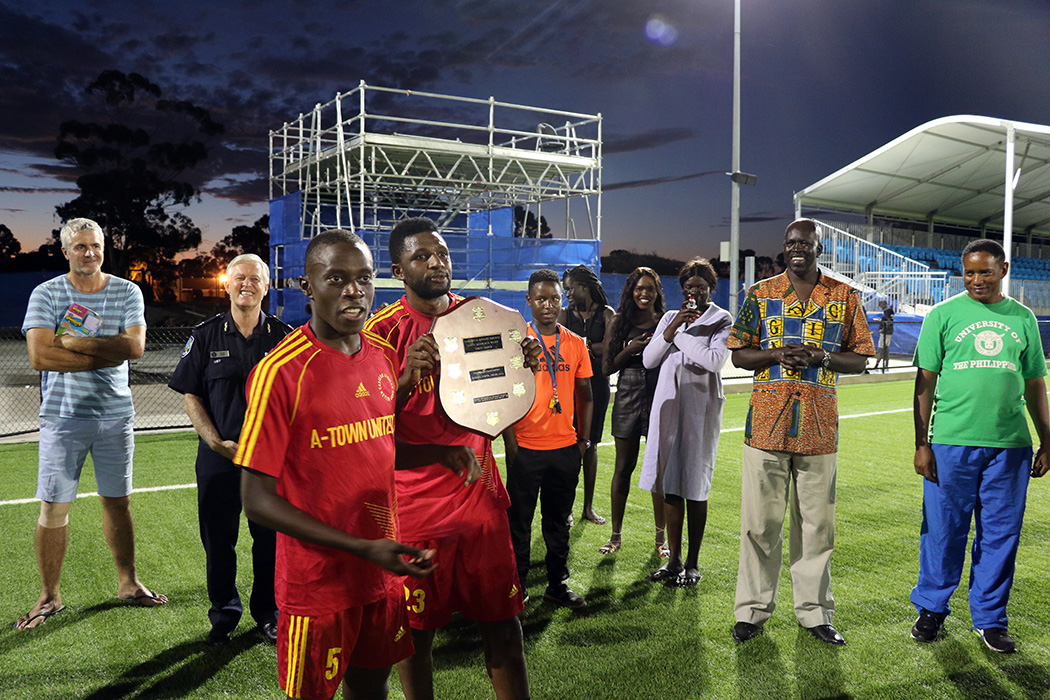 Australia has significantly changed its sporting habits due to the influx of the millions of migrants from all over the world who have brought their sporting culture with them, which has in turn immensely influenced and enhanced the Australian way of life.

On the 26 March 2017, to mark Harmony Day and in recognition of the United Nations’ International Day for the Elimination of Racial Discrimination, the South Australia Police Soccer Open Teams and Africa United SA teams played friendly soccer matches at Elite Systems Football Stadium at Angle Park.

The first game was the women’s competition which kicked off at 4pm. Africa United SA’s women’s team were under continual pressure to cope with the energetic police women’s team, who eventually ran out winners.

The men’s game was quite the opposite as the fast passes of the young and energetic Africa United SA team proved too strong for the police team to handle.

This annual soccer competition between the SAPOL Open Team and Africa United SA started in 2012 as a means to bridge the difference in understanding between SA Police and the African Community, particularly the African youth.

The rationale for the tournament is to play a game of soccer against SAPOL Open Team during a notable day on the event calendar. In 2012 and 2013, it was played in Refugee Week, and from 2014 onwards has been played on Harmony Day. In spite of a win for Africa United SA in the men’s competition and a loss for the African women’s team, it’s still a “harmony win”, and all participants are winners.

The manager of the Migrant Resource Centre – Northern Suburbs, Mr Reagan Bledee, applauded the players for a job well done saying, “it was excellent seeing African youth engaged with the police in a friendly manner and displaying their exceptional soccer skills.”

Assistant Commissioner Bryan Fahy who presented the two United Captains, Arsene Iribuka and Christian Taylor, with the Unity Soccer Shield trophy, thanked the players and acknowledged the number of people attending the game.

After the game, the Africa United SA team enjoyed dinner at the African Village Centre Restaurant in Torrensville. In a joint statement, the Police African Liaison Officers, Juma Abuyi and George Fomba, who are the organiser’s of the soccer event, commended the efforts of those who committed to playing the game, and those who helped with organising and assisting during the match.

“In particular, we offer our special thanks to South Australia Police, Migrant Resource Centre of South Australia, African Communities Council of SA, African Village Centre, SALT Magazine, Watalii Safaris, African Women’s Federation of SA and FNE Lawyers for supporting the event, both financially and in kind.”

>>>Check out all the pics on our Facebook page.