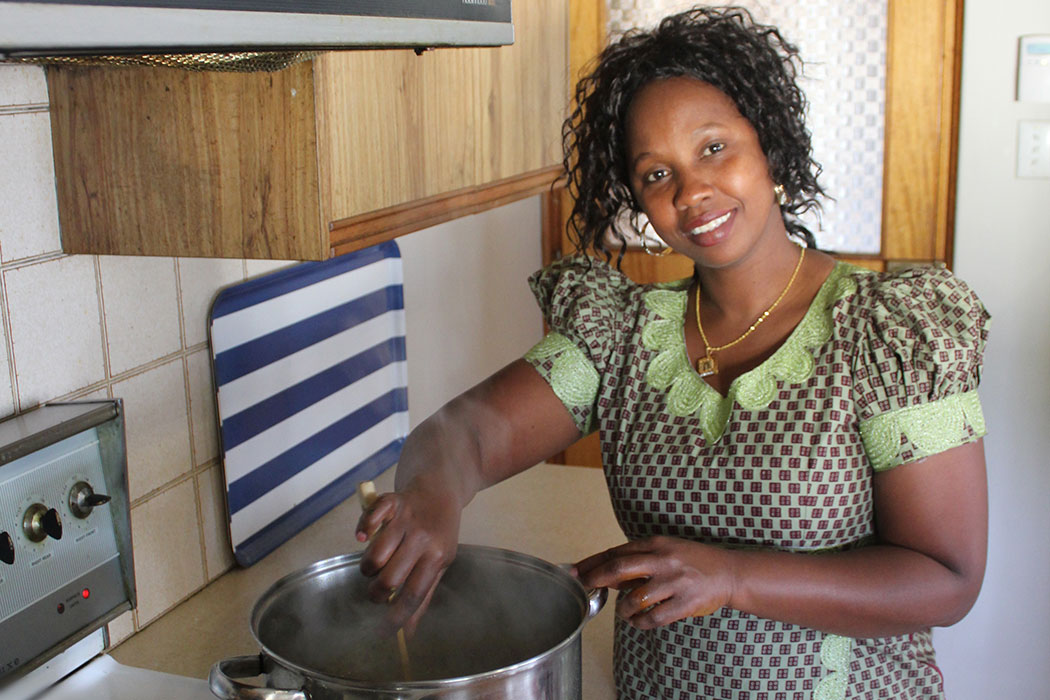 It’s safe to say that all Africans living in Australia would yearn for a home cooked meal from their country of origin. Over the years foodstuff from Africa has been finding its way to Australia and
now you can buy all your local ingredients you used to buy in Africa right here in South Australia.

SALT Magazine dropped by to visit Isatu Bah – originally from Sierra Leone for some home cooked Krain-krain, a popular dish served in West Africa. It is one of many ‘plassas’ sauces cooked across Africa that seem similar but are actually very different in their preparation and flavour.

It is also known as Molokhia (Mulukhiyah, mloukhiya, molohiya, mulukhiyya, malukhiyah, or moroheiya) and comes from the Corchorus plant, the same plant that the fibre Jute comes from, which is the most widely cultivated vegetable fibre after cotton. It is also used widely in Egyptian, Lebanese, Palestinian, Kenyan, Sudanese and many other cuisines. It has quite a slimy texture when cooked, similar to that of Okra. In fact, Mloukhiya is also the Moroccan term for Okra.

One thing we’ve learnt is that ‘African’ cooking in general is not something that is measured. It seems as though it’s a skill that is in the blood, an instinct learnt from watching mothers and grandmothers cook, rather than from following recipe books. This makes it very tricky to produce a standard recipe, but we’ve tried to follow how Isatu prepared it to create one for our readers!

Traditionally served with steamed rice, the dish has a distinct flavour but the overall result is tasty. We definitely urge you to give it a try, as Sierra Leoneans would say, ‘it’s a good chop!’ 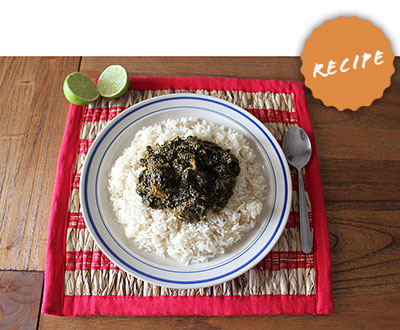 INGREDIENTS
500 grams of diced beef (Sierra Leoneans prefer to use ‘curry pieces’ that include the bone)
1 Dried catfish
1 Cup of palm oil (can be substituted for peanut or any vegetable oil)
1 large onion, diced
3 Packets of Molokiah leaf (or 3 ties of the fresh leaf)
1 Maggi stock cube
1 Habanero Chilli (or more if you like!)

1. Place dried catfish in boiling water and leave to soak.

2. Rinse beef and season with salt, chicken stock and season all salt (roughly one teaspoon of each). Place in pot and steam on a high heat until the meat has started to cook through (there should be a small amount of water in the pot left from rinsing the meat). Before the water has evaporated, add 1/2 cup of water and allow to simmer for a further 10 minutes, keeping an eye on it to make sure the water does not evaporate.

3. Add palm oil (or peanut / vegetable oil) and allow to simmer for 5 minutes.

4. Meanwhile, remove soaked catfish from water and ‘pick’ the flesh from the bone. Sierra Leoneans tend to use most of the fish so you can remove as much of the flesh as you like.

5. Add diced onion, fish, maggi cube and salt to taste and leave to simmer for a further 5 minutes.

6. Remove Molokiah leaf from packet and add. Leave to cook for anywhere between 15 – 30 minutes, depending on how much water there is in the pot. You will know it’s cooked when the water has ‘dried’ up and the oil is sitting on top.

7. Serve on a bed of steamed rice with fresh lime on the side.

WHERE TO BUY INGREDIENTS?
All the ingredients in this recipe can be purchased from the African Pride Superstore at 15 Kilkenny Road, Woodville.

A SIDE NOTE ABOUT CHILLI
Most Sierra Leonean’s like a lot of chilli and would steam chilli in sauce, remove and beat in a Mortar and Pestle before adding back to the sauce. The habanero chillies are VERY hot so be warned, if you are not a fan of HEAT, we would suggest leaving it out!

FRESH KRAIN-KRAIN LEAF
If you have managed to find the fresh leaf, it’s traditionally cut in a very skilful way, where the bunch is held in your hand and you use the knife to slice finely (see picture) but you can also use a cutting board to slice as finely as possible.