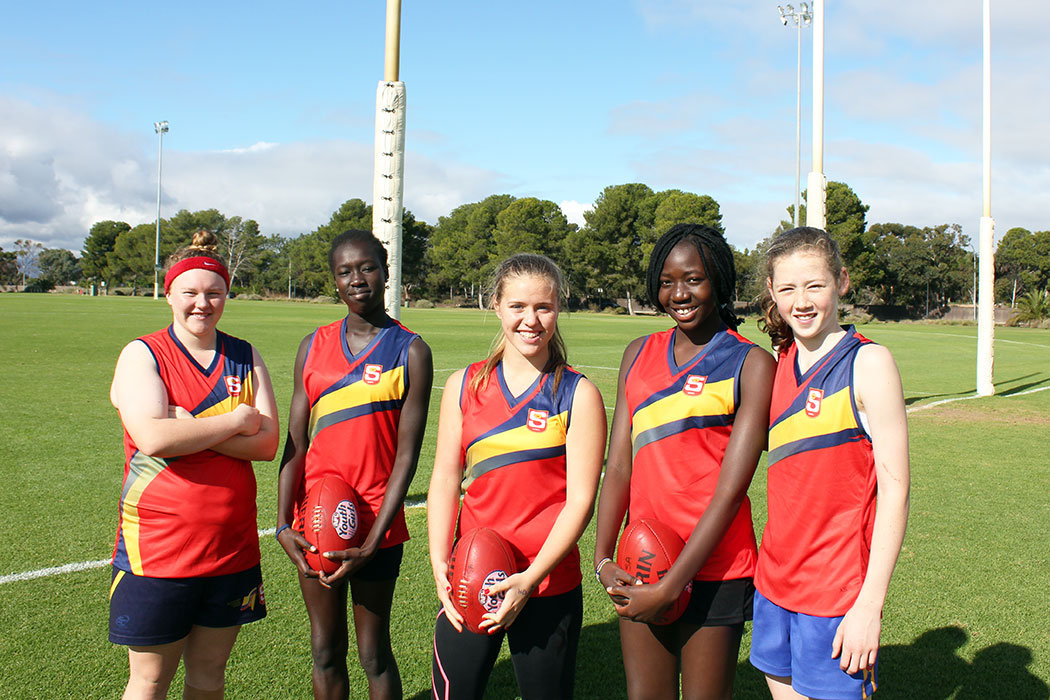 Sudanese born Suzan Kenyi and Margrait Chol are amongst 26 girls selected to represent South Australia in an upcoming Under 16 “footy” tournament for girls, to be held in Sydney from the 20th to 26th of July 2014.

It is great opportunity for the girls, and an opportunity to be selected to represent Australia in a national touring team.

Emma Gibson, Coordinator of Female Football in the SA National Football League (SANFL), said interest in female football is on the rise and by 2020 there could be a female equivalent of the Australian Football League (AFL).

“Basically these girls are being groomed to become the future female SANFL players,” she said, adding, “Football is not just about being good at sport, it also builds your personal development as well, and getting young girls involved at this level is a great opportunity.”

Salt Magazine went to a training session at the SANFL Oval at West Lakes to talk to the two girls, and found both girls shocked but excited by the news that they had been selected to represent South Australia in Sydney.

“I wasn’t expecting it so I’m very happy that I made it this far” said Suzan, as Margrait chimed in and said her love for the sport has been a gradual process, “ I used to hate watching football on TV but now I love it, you have to use all parts of your body while playing, it’s really fun”

Preparing for the tournaments for these girls has been a huge task, especially as they are required to pay for their own fare and accommodation, because, even as State representatives, there is a serious lack of sponsorship funds for female players of the national game.

The two girls have to rely on support from their former Kilburn Chicks coach, Mal Thiel, who helped them to raise funds to participate in the event. Across all sports, youngsters from migrant backgrounds find it hard to participate because of the costs involved, including transportation to training and to games.

Mal Thiel, who is their coach and mentor, said he is very proud of the girls. “They are now at the next level, playing against very good players so these girls have to raise the bar. They have already got ability but now they are mixing with everyone else with good ability and they have to find an advantage.”

The team and tour manager, Alison Walker, representing the South Australian Secondary Schools Sports Association said the interstate footy tournaments for girls have now been held for four years. “The first year was in Canberra, then Adelaide, last year in Darwin and now this year in Sydney”.

According to Alison making it to this stage has been a real test for all the girls, “They’ve been through trials and a strict selection process for the best of the best to be chosen. It’s quite a challenge for the girls and now they have to stay in form to bring the trophy home. “

Alison acknowledged that cost is a big hurdle for many potential participants. “Once they have made the team, most have to go to find sponsors or raise funds themselves. School state representative teams are usually not Government funded; the girls are given an official letter saying they have been accepted to the team, and this helps when they look to business and sporting organisations for sponsorship”

According to the State team coaches Lisa Kennedy and Ryan Paget, both Suzan and Margrait deserve to be in the team. “I think they have a very bubbly personality, their skills are obviously improving every time they come out and it would be awesome to see for girls who haven’t played lot of competitive footy to fit in with some girls who have played competitive footy for four or five years” said their assistant coach Ryan, “it’s been awesome to see the way they have progressed.”

Suzan Kenyi’s, uncle Ben Bekitt, said he would support Suzan to pursue her dreams of playing high level football “if that’s what she wants to do”. He thinks the game has helped Suzan to be better organised as she is juggling footy and schooling very well – and making friends in the process.

However the cost aspect of it is a bit worrying he said. “I don’t know why parents have to be paying that amount of money with no support for any of the costs. We are responsible for everything from uniforms onwards, and it may be too much considering the situation of most migrant parents. I think if you are representing your State, there should be more funding to pay for it”

Salt Magazine congratulates the girls for being selected in this tournament; and applauds Mal Thiel for believing in them and supporting them to realise their sporting ambitions. We hope these two young ladies are just the first of many young African Australians who will, in future years, proudly represent their adopted States.

A role model for all African Australians, Dorinda Hafner wears many hats and is one of South Australia’s most prominent success stories. Among the…