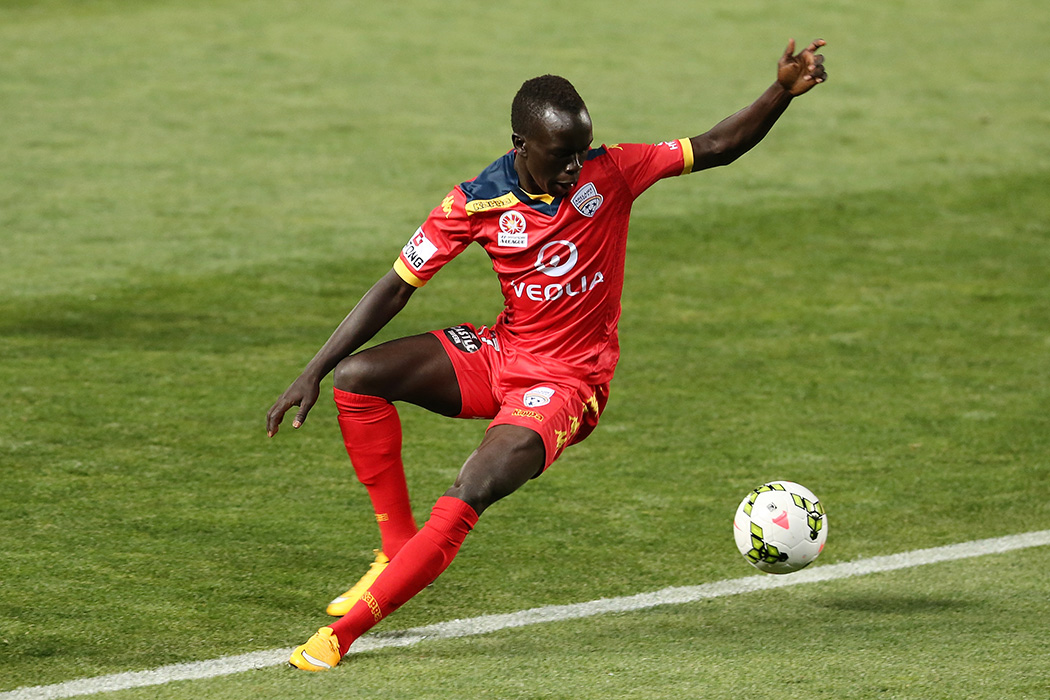 Nineteen-year-old, former Adelaide United FC winger, Awer Mabil is off to continue his career in Europe. I had a chance to catch up with the young star before he left to join his new team, FC Midtjylland in the Danish Champions League.

Born and raised in a Kenyan refugee camp until the age of ten, Mabil came to Australia with his family in 2006. He began playing soccer as a child with friends in the camps. As the main sport, he developed a love for the artistry of soccer, and says it is his way of communicating.

‘I fell in love with it because you can express yourself when you play. It’s easier to express myself playing soccer than talking,’ said Mabil.

Mabil began playing locally when he joined a club two years after arriving in Australia. He slowly climbed the ladder, moving between clubs, until he was recognised by a state team. Within months he was invited for a trial with what was then known as the South Australian Sports Institute (SASI) where he played for the following two years until he was spotted by Adelaide United FC (United).

What began as filling in for an injured player became the beginning of the career Mabil is pursuing now with grace.

“They kept me in the squad because they thought I did alright,” said a modest Mabil.

Quickly overcoming his initial nerves at the first United match he played, Mabil has since remained a stand-out player in the team comprised of players he now calls brothers.

Although football is his first love, Mabil believes he has a responsibility to the world, and says that he wants to use the game to help others. Early in 2015, Mabil launched ‘Barefoot to Boots’, a foundation that provides soccer boots, balls and other equipment to those in refugee camps in Kenya. However, the United player says it is early days yet, and the organisation hopes to do much more in the future.

“It’s not just going to be about football. We go to the camps and deliver football gear but we also talk to the girls and see what they need.

“Through football, we can help out education-wise. We’re going to go back and provide books and pencils.”

2015 has been a year of ups and downs for Mabil after an injury early in the year forced him to spend four weeks out of the game. On his first game back, he scored, but once again tore his quad in the same place. After returning from that injury, he scored the winning goal against Brisbane Roar, taking the team to the next round of finals – the highlight of his career so far.

“It was actually one of the best and worst experiences at once,” he laughed.

While his new member club had been scouting him for some time, his move to Europe was only announced in the week of his departure in July. This followed a game against EPL favourites, Liverpool in Adelaide.

‘Everything happened real quick but I was thrilled,’ said Mabil.

Mabil said none of this would be possible without the support of his family.

“My mum and my whole family have always been there. They supported me since I told them soccer was all I wanted to do.” Mabil says this is often a barrier for young Africans. There is little support or encouragement for them to pursue sports. “We’re not giving [our] full commitment to our children when, at the end of the day, they’re the future.”

Mabil has a strong message to send to aspiring players.

“Even if you make a little step, don’t get ahead of yourself. Remember where you started and why you started. If you get something out of it, just try to help other people come up as well. And stay humble.”

So you have just finished University and it’s time to get out there and show the world what you’ve got. You’ve spent all your…