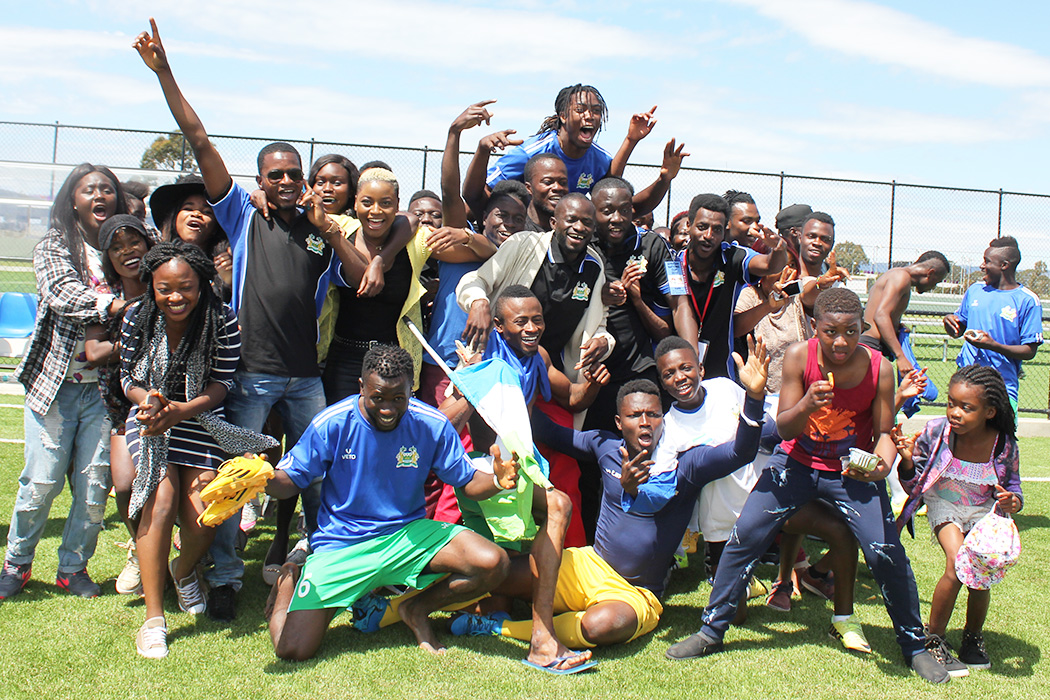 The Sierra Leone Community soccer team in South Australia ‘Sierra Stars’ for the first time won South Australia’s annual African nations cup tournament defeating defending champions Burundi on Sunday 1st of November 2015 in a five goal thriller that has supporters of both sides on their feet throughout the tournament.

The curtain raiser to the big finale of the year saw the Liberia team taking the third spot from Ethiopia in a 2-0 game.

The Annual African Nations Cup, hosted by the African Community Council of South Australia in collaboration with the Football Federation SA kicked off on 24 October 2015 at the Burton Oval in Salisbury with 14 participating teams. Eight teams scored their way out of the group stage to fight it out at the Elite Systems Football Centre; Angle Park, Adelaide and ironically last year’s finalists Sierra Leone and Burundi were once again pitted against each other.

Just half an hour in to the game Burundi scored the first goal and in less than a minute Sierra Leone equalised. The hotly contested final saw the two power houses trade blows, with momentum swinging either way throughout the ninety minutes.

“We had our chances in the first half, but the game was tight, it was a good game, and four times in a row reaching the finals I’m proud of my boys” the Burundian Team captain Jean Marie Sengiyumva told SALT Magazine.

Samuel Sesay, Sierra Leone’s goalie and Team captain said “It wasn’t an easy game, to play against Burundi, they are very good, but we worked hard to win and make our community proud”.

The Coach for the Sierra Stars team Sylvanus Williams said it feels great to win after all these years. “We trained hard and learnt from our past mistakes, I’m really proud of the boys and the support we got from our community” William said.

It was a big day for the Sierra Leone community.  “To see your team winning is just amazing I don’t have a word to describe it other than just to say we are happy, very happy” said The Chairman of the Sierra Leone Community Matthew Nyande.

Chairman of the African Community Council of South Australia (ACCSA), Mabok Deng Mabok Marial, who witnessed the exciting encounter, said it was a really good performance by both teams.

“Sierra Leone and Burundi are well managed teams and they get a lot of support from their communities and that is making the difference,”
Mr Marial said the organising body will be looking at introducing junior divisions to the event in the coming years.

Michael Carter Chief Executive Officer at Football Federation SA told SALT Magazine that the event is growing. “I think from where it stands it’s fantastic it’s been an absolute showcase for the game, you see quality players out there and I think the event is growing every year”

SALT Magazine thanks the organisers for putting together this awesome event and we also congratulate the champions and all the participants in the tournament.

The 2017 Adelaide Fringe kicked off it’s opening weekend on Saturday 18 February with the annual Fringe Parade. With more than 1100 events, the…