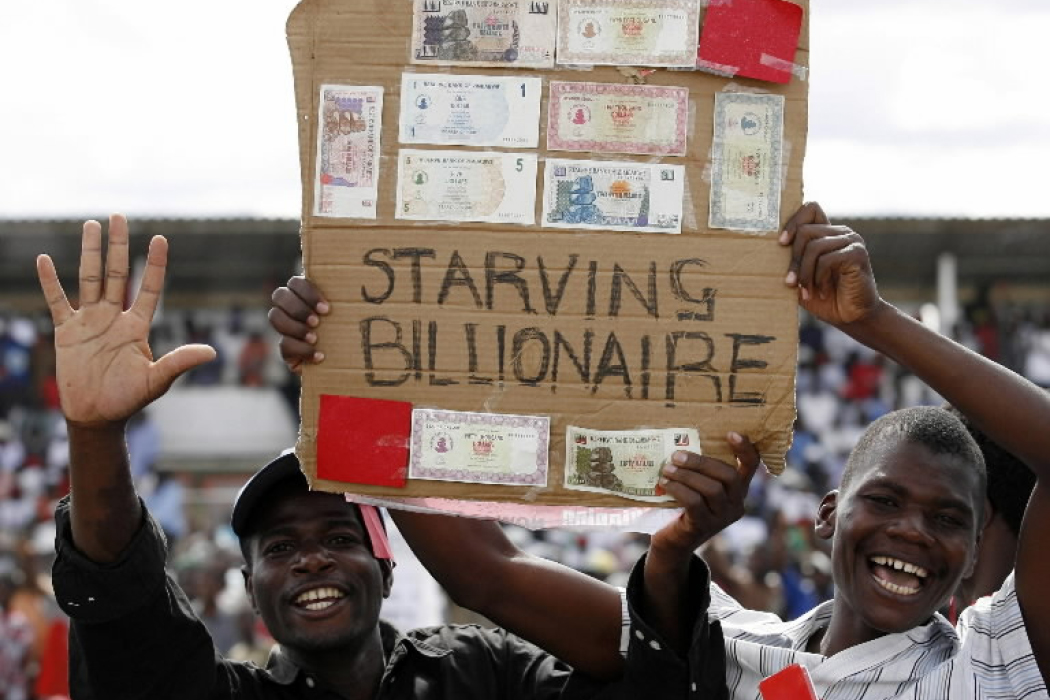 The word inflation does not even begin to make sense unless one travels to Zimbabwe. Currently the inflation rate is at 3.5 MILLION percent and I use a few examples to help illustrate this fact.

A brick today costs the same amount a 3 bedroom house cost 25 years ago, a loaf of bread costs as much as 12 new cars could have cost 10 years before and if you fancy an egg for breakfast then I suggest counting your bills as one egg in Zimbabwe costs FIFTY BILLION DOLLARS – no typo here.

The country has just issued its latest currency bill which is valued at ONE HUNDRED TRILLION DOLLARS. I shuddered when I received the bill, hoping deep down that I never need change for a bill that large as I will have no way of carrying the change unless I hire some sort of modified forklift.

Despite the dire situation I found that Zimbabweans still embraced their lives with a great degree of humour. Walking down the street, a beggar brandishes a sign laden with Zimbabwean bills with a text in the centre stating that he was a “starving billionaire” in need of great assistance. The discovery that I am an African foreigner from another land only leads to them unleashing their humour on the unsuspecting whilst unanimously bearing the same cheeky grin.

When my hotel room ran out of toilet paper the concierge stated that toilet paper was out of stock but “he would be more than happy to send me some Zimbabwe Dollars if I needed some urgently” with a chuckle. When taking a taxi, one must carry the exact amount or risk having to hire another taxi to drive behind you to carry your remaining change. After a few days all the extra zeros began to give me a headache so I began to pay with American Dollars and vehemently insisting that the vendor keep the change. An easy feat when a hamburger and fries cost me the equivalent of $1.5 US dollars.

I began to reflect on why the locals were still able to find laughter amidst the madness and the trillions. Then it hit me that what they were doing was a very common trait within the African identity. In countries where the situation was rough or dire –and there are plenty- a nation unique brand of dark humour –pardon the pun- seems to evolve from the masses. In Sudan where a dictator has reigned supreme for over 30 years under what has been effectively a police where silence is golden you see cars with bumper stickers with the most cryptic –or not so cryptic depending on how you look at it- messages such as “You’re an idiot and you know who you are” and “I truly regret not finishing trade school”. Hotel staff will also cheekily give a choice between hot water or electricity as “you cannot have your shower and heat it”. The same thing goes in Egypt where anti-government protests carried signs that said “Please step down, I have been protesting for weeks and miss my wife” and “Please come back, we were only kidding”. Dark humour has become our only free and implicit defence mechanism. We all get the butt of the joke but will never name it out loud. In continent where misery truly loves company, a private joke that only you and your fellow countrymen get has truly become worth billions and billions.

Originally from Sudan, Mujahid Ahmed is a trauma psychologist and humanitarian specialist. He has lived in Australia since 2001. He began pursuing a career in stand-up comedy in 2005 and has travelled around the world. Mujahid has featured on national television and radio as well as being the preliminary speaker for TED talks in Sydney in 2014.

Social Enterprise – the future for Team Vista work in Tanzania

When I returned to my home in Australia from Tanzania in February 2009, I never imagined what the next 6 years would have in…