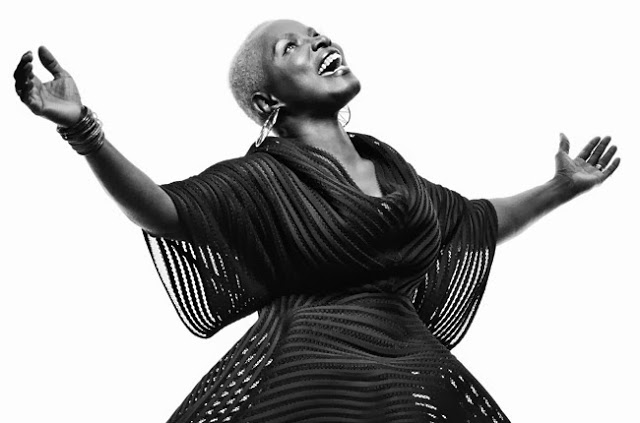 RELEASE OF AUTOBIOGRAPHY “SPIRIT RISING: MY LIFE, MY MUSIC” ALSO DUE IN 2014

Arguably one of the most powerful women of our generation, singer/songwriter/activist Angelique Kidjo has been dubbed “Africa’s Premier Diva” by Time Magazine, listed by The Guardian as one of the 100 Most Inspiring Women in the World, named by BBC as one of Africa’s 50 most iconic figures, described by The Daily Telegraph as “the undisputed queen of African music.” In January 2014 Angelique Kidjo, the Benin born, Grammy Award winning singer/songwriter will release EVE, a vibrant new collection of songs dedicated to the power of African womanhood, particularly those women she grew up with in her native Benin. EVE will be released on 31 January 2014 on 429 Records through Universal Music Australia.

Produced by Patrick Dillett (David Byrne, Fatboy Slim), EVE, named after her mother, is a joyous musical ode to thepride, beauty and strength of African women and their worldwide socio-cultural influence.  The recording showcases Angelique Kidjo’s extraordinary musical vision as realized by remarkable players as well as women’s choirs from several African villages in Benin and Kenya singing in a wide array of native Beninese languages including Fon, Yoruba,Goun and Mina.

Says Angelique Kidjo:  “I’ve spoken for many years about the beauty of African women, and I don’t need to talk anymore about it because on this recording I am letting the voices of the women show their beauty to the world,” she adds. “EVE is all about showcasing the positivity they bring to their villages, cities, culture and the world.”

A pure musical delight for Australian fans, Angelique Kidjo has played here multiple times, most recently in 2013 for Sydney Festival, and 2012 for Bluesfest.

Angelique Kidjo’s accolades include a 20-year discography and thousands of concerts around the world. Her 2008 recording Djin Djin won a Grammy for Best Contemporary World Music Album and her last studio recording Oyo was nominated in the same category.  She has enjoyed a long history of notable collaborations with greats from the jazz and pop worlds—including Carlos Santana, Bono, John Legend, Josh Groban, Peter Gabriel, Branford Marsalis, Dianne Reeves, Roy Hargrove and Alicia Keys. In an expansive career marked as much by extraordinary musical achievement as passionate advocacy and philanthropy for her homeland of Africa, Angelique Kidjo has found many ways to celebrate the rich, enlightening truth about the continent’s women beyond the media spotlight.

To view a compelling EPK on EVE visit:
http://www.youtube.com/watch?v=CTgj_myK3qk

It’s the Morning Tea break, and we’re all slowly making our way to the Dining area to help ourselves to some treats. I’m attending…