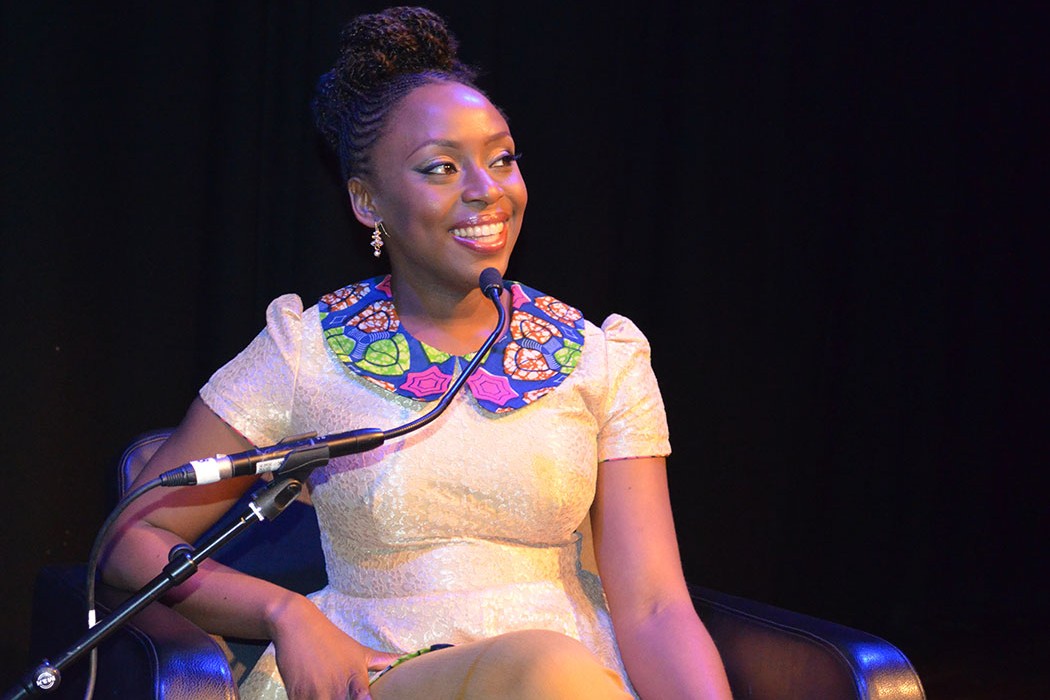 Just recently SALT Magazine was invited to an exclusive preview screening of a major, new film – Half of a Yellow Sun, starring Oscar nominated actor Chiwetel Ejiofor (Twelve Years a Slave) and International star Thandie Newton (The Pursuit of Happyness), and is due for general release across Australia in March 2014.

This film adaptation of her work represents mainstream recognition of Chimamanda’s work – from publication of her collection of poems ‘Decisions’ in 1997 to now being ranked among the most prominent African writers of the modern age.  With numerous awards to her name, her most recent novel ‘Americanah’ being selected by the New York Times as one of The 10 Best Books of 2013, and part of her recent TED talk being used in Beyoncé’s song ‘Flawless’, we thought it timely to have a chat with Chimamanda, and find out more about her and her newfound fame.

She spoke to us via Skype from her home in Nigeria.

We started by asking how she began her writing career and did she ever think she’d gain such wide spread celebrity status.

“Writing is not about fame,” she said firmly, “It’s all about a love for storytelling. As a little girl I’d fill up my school books with stories. I’ve always been writing, it’s always been my first love, and even if I’d never sold one book – I’d still be writing.”

So what is your favourite moment when writing? We asked.

“When I’m in the middle of the story, and it’s going very well – that’s when I’m happiest.” but then added, “The toughest part is when you trying to start a story and is not just going well.”

We turned the conversation to the book Half of a Yellow Sun and wondered how she chose to write it as she had.

“The war affected my family” she said, “My grandfathers died in the war and hearing stories of my grandfathers made me sad so I wanted to understand what the war was about. It’s my family’s experiences that made me so interested”

Chimamanda agrees that the story is told from an Igbo perspective but emphasizes that it wasn’t propaganda in favour of Igbo people.

“The book has been read widely throughout the country which has made me very happy … it’s not a book about settling scores it’s a book about saying we have to know what happens in our country, this is our history”

Chimamanda said she was happy with the film adaptation, “It’s a very beautiful film, it’s very well done, I think the acting is really very good and I love the fact that it was filmed in Nigeria which was my only requirement”

Apart from her writing, Chimamanda is well known for her fashion sense and especially the headlines about her “hair do”.

“People see me and say “Oh it’s so old fashioned” but then I’m thinking – but you know 25 years ago beautiful elegant African women wore their hair like this and they were proud of it.  We don’t all have to have hair that is straight and falls down to our backs”

Chimamanda obviously holds strong views about many so called African problems, including gender inequality, domestic violence and so on, and expresses her views just as strongly.

“There are many things that we do that are wrong and unjust and we say it’s our culture we need to stop saying that because culture changes all the time” she said.

“I think the idea that somehow the west has made progress and Africa hasn’t is really not true,” she says “There is still as much domestic violence in the west as in other parts of the world, there are still cultural assumptions that put women below men in the west as may be in Africa. The only difference really is that women in the west may have some legal protection which African countries may not have”.

Her advice to young African girls living in the west is simply “Follow your dreams, never apologise for who you are, and always believe you can do whatever you put your minds to.”

Words of wisdom indeed, and SALT Magazine feels privileged that she gave us her time.

Salt Magazine in conjunction with Leap Frog films will be hosting a special preview screening of Half of a Yellow Sun in Adelaide.
DATE: Monday 24 March, 2014  TIME: 7pm  LOCATION: Picadilly Cinemas, North Adelaide

Tickets are available for purchase online or by calling Sidique on 0433 770 or emailing hello@saltmagazine.org.

Proceeds from the special Adelaide screening will be donated to Team Vista to support their projects in Tanzania.

NOT IN SOUTH AUSTRALIA?

You can find out where the movie is being screened in all states by visiting www.halfofayellowsun.com.au

After the unexpected success of the first ever FreekÀ runway 2015, I was really skeptical and reluctant to venture into FreekÀ Runway 2016 however…