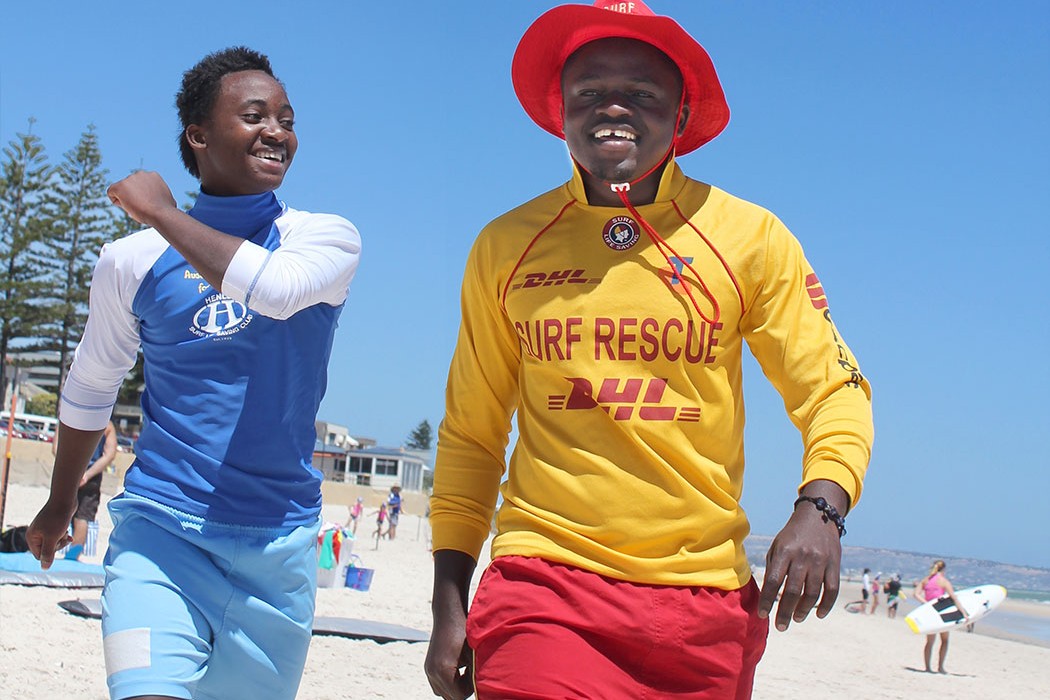 Rivers and oceans can be dangerous places – especially African rivers and oceans, full of all sorts of hidden dangers, so venturing into them was usually of necessity and not for fun.

Now Africans in Australia, surrounded by water, in one of the hottest regions on earth, are tempted to beaches, rivers, pools or any other stretch of water to cool down, splash about and try their best to look as if they know how to swim – even though they remember the many, unfortunate drowning incidents of new arrivals that have been reported.

But, at least in South Australia, it’s a little safer because of 20 year old, Congolese born, Matthew Chimu, who arrived here with his two siblings in 2009.  In the short time he’s been here, Matthew has been the worthy winner of a Pride of Australia Award for his exploits at the Henley Beach Surf Life Saving club where he has now obtained his Bronze Medallion.

SALT Magazine put on some board shorts and caught up with Matthew at Henley Beach for a chat.

“I read an article that said 35 percent of migrants don’t have any experience in the ocean and many drown because they can’t swim,” he said, “and as many are from Africa, I was moved to join Surf Life Saving to try and help the community. I didn’t swim either before I came to Australia because we had no beaches, just rivers, and my parents didn’t allow us to go swimming in the river.”

So Matthew made it his mission to learn how to swim – which he did within 3 months of arriving here. “I learned how to swim, then did first aid training & CPR, was taught how to use a defibrillator and board paddling” Matthew said, adding that he can now swim 400 metres non-stop,  and wants to get more involved in competition swimming, and “maybe represent Australia one day…”

He said that connecting with the African community was initially challenging because of their fears about sharks, big waves and the other unknown monsters of the deep, but as more people saw him at the beach, many started to feel confident enough to ask him questions about learning how to swim and getting involved in the surf club.

“I now have seven people who I’m teaching to swim, paddle the board and that sort of thing,” he proudly reports, “Two of them are girls whose biggest worry was about messing up their hair.”

Matthew’s involvement with the Henley Beach Surf Life Saving club started when he was referred to the On the Same Wave program under the supervision of Roy Menner, a swimming veteran and chairman of the program committee, who told us that the program was established by Surf Life Saving Australia to reduce the number of overseas visitors and new migrants who were drowning in Australia. Its aim was to educate those people about the dangers involved, and the best way to do that was through people of migrant backgrounds.

Roy added that there is some support and funding to teach African youngsters to swim, but ongoing funding was uncertain. In the meantime he encourages anyone interested in becoming involved to contact Surf Life Saving SA who support the On the Same Wave program.

SALT Magazine congratulates Matthew on his achievements and recommends all new arrivals to find out more about the On the Same Wave program.

A number of rallies have recently been held across Australia over claims that Muslim groups want to change Australia’s cultural identity. In Adelaide, the…