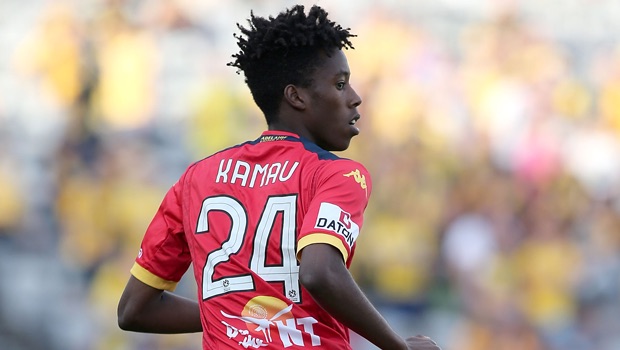 As a youngster Bruce Kamau dreamt that one day he would lace up a pair of football boots as a professional. Now at 20 years of age, the Kenyan born-Australian who calls Adelaide home is living his dream.

After migrating to Australia in 1999 with his family, Kamau realized his potential and began his journey.

Following impressive displays throughout the two seasons, he was given his chance in the first team, making his A-League debut against the Brisbane Roar in round one of the Reds 2014-2015 campaign.

Kamau then went on to make 11 total appearances in his break out season. With a new season underway under new head coach Guillermo Amor, the future can only get brighter for the quick and skilful ace and SALT Magazine had the opportunity to sit down with United’s number 24.

What did it mean to you debuting in your first professional game last season with Adelaide United?

“It was great to make my professional debut for Adelaide United, it was a goal that I had been working towards while playing my junior football and whilst with the youth team. It was rewarding to see hard work pay off and to achieve that goal of mine. It’s motivation to continue working hard and do bigger and better things.”

How do you feel the team will cope now in maintaining the attractive style of play set by previous manager Josep Gombau?

“I think Josep instilled a football culture that will be evident at the club for years to come and with Guillermo; a person who has not only played the system at one of the greatest clubs in the world, but who was also a part of the coaching staff for the last season, stepping in to the managerial role I think the fans can expect to see their team playing the same attractive football as the previous season.”

Have you seen your own game grow over the past couple of seasons with Adelaide United?

“I think any time you go from part time training, to a full time professional environment with the a better calibre of players your game can only improve. It allows you to learn from players who have been playing at a level your currently striving to achieve.”

What are your thoughts on the home city support for the club and in particular for you, now that you’re becoming a household name?

“It’s great to have such a strong following of fans supporting the team week in week out, and for me personally it means a lot to get recognition and support from not only from the fans but also from the Kenyan/African community.”

Looking into the 2015-16 campaign, what goals or expectation have you set yourself as a footballer?

“I’ve set myself a number of goals for this season. I have high expectations for myself and this campaign and I’m striving to be a crucial part of the team in our challenge for the minor premiership and the title. As for the rest of my goals, I’ll keep those to myself.”

Kamau has joined a trending list of African native players to burst into the Hyundai A-League, including former team mate Awer Mabil.

Adelaide United will now look to build on their first round draw when they take on Western Sydney Wanderers at Coppers Stadium on October 16.