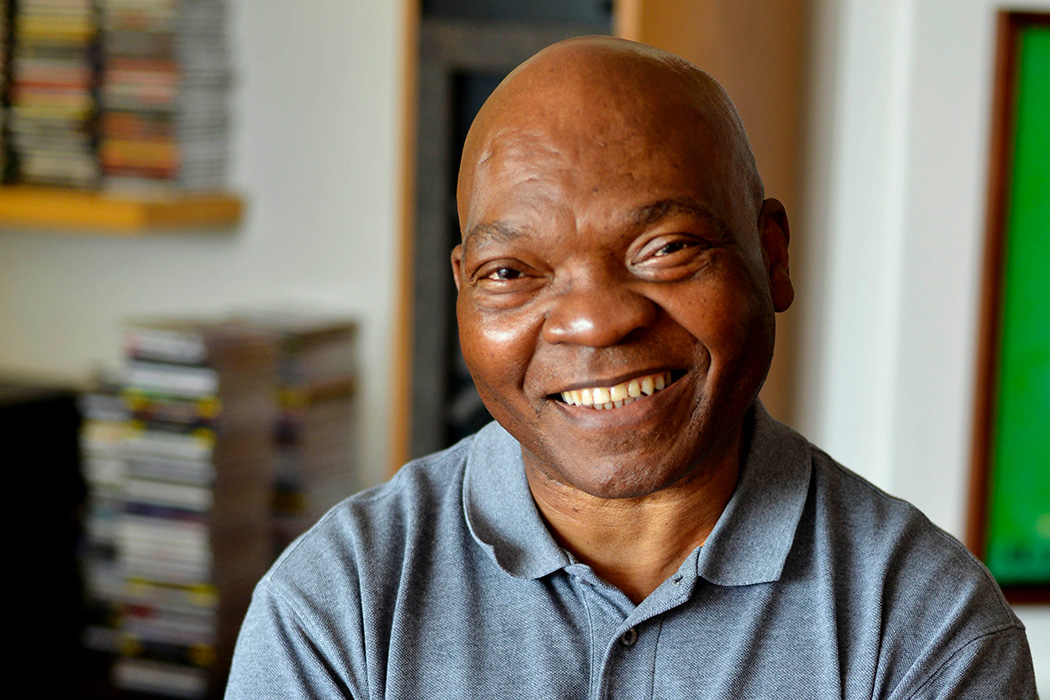 Growing up as a witness to the vast injustices of apartheid in South Africa during the 60s and 70s, Mandla Langa’s harrowing experiences led him to a life in exile, a leading role in the ANC in the United Kingdom and eventually the opportunity to not only meet Nelson Mandela, but to also complete the memoir he’d started but was unable to finish.

As a socially aware 19 year old in South Africa, Mandla Langa was keen to communicate his observations of the political landscape to the wider world as a cartoonist. His friends, however, recognised his somewhat superior talent as a writer and encouraged him to travel down that path instead. It wasn’t long before his first poem against the Pass Laws (laws which controlled the movement of black South Africans within the country) was published. Mandla continued to hone his story telling skills and in 1980, whilst living in exile, earned international recognition when he won an Africa-wide short story contest with The Dead Men Who Lost Their Bones. Another milestone came seven years later with the publishing of his first novel Tenderness of Blood. In 1990, two months after Nelson Mandela was released from his 27 year jail sentence in South Africa, Mandla Langa had the privilege of meeting the great leader in London, a remarkable encounter which would later lead to an intimate working relationship between the two men.

Dare Not Linger: The Presidential Years by Nelson Mandela and Mandla Langa was published this year (Pan MacMillan), four years after Mandela’s death. The much anticipated sequel to his autobiography Long Walk To Freedom, Mandela commenced writing the memoir as he prepared to finish his term as president, but due to the many demands on his time, he’d been unable to complete the task. This honour was bestowed upon distinguished poet, short story writer and novelist Mandla Langa. SALT Magazine had the opportunity to chat with Mandla, exploring his life growing up in South Africa under apartheid, his experiences as a young activist and his personal connection to Nelson Mandela.

Mandla was born in 1950 in Stanger in Durban to church leaders.  His parents’ work saw them travel throughout South Africa, giving him his first insights into the widespread poverty and daily struggles facing the country’s predominantly black population. His own family was no exception – he recalls often going to bed hungry as well as his parents’ struggle to put their children through school. “The long and short of it is that life was a daily grind. I wanted to see the system of apartheid done away with.”

As a teenager, listening to the politically charged conversations of his parents and teachers, something struck a chord with Mandla. He began reading activist material and by 19 years old, he was successfully publishing his own opinions through poems and stories. “The struggle against apartheid was grim. The regime was brutal and sought to grind people under its jackboot. People were dying in prisons and detention centres and there were cross-border raids against ‘enemies of the state’ in neighbouring countries.”

Mandla became a member of the African National Congress (ANC), whose primary mission at the time was to end apartheid. A widespread student walkout of universities in 1972 also prompted him to become an official of the South African Students Organisation, immersing himself further in the philosophy of black consciousness. Then, following a massacre of students by the police in 1976, Mandla fled the country for exile.

Despite the despair and desperation of that period in South Africa’s history, Mandla recalls the strength and inspiration that flowed from the anti-apartheid movement. “In all that – given that people, in all their diversity, were resolute and optimistic, and the world was on their side – there was a lot of camaraderie and solidarity among the people and organisations engaged in opposition to apartheid.”

Throughout his time in exile, Mandla continued the fight for South Africa’s freedom through his writing and political work. He was working as the Deputy Chief Representative of the ANC in the UK in 1990 when the joyous news finally came of Nelson Mandela’s release from prison. Two months after the release, he assisted with the organisation of the historic music concert at London’s Wembley Stadium, Nelson Mandela: An International Tribute for a Free South Africa, a momentous event which officially welcomed Nelson Mandela back into the world. Mandla recalls: “This was my first meeting with him. He was hosted at the residence of Sir Shridath Ramphal, Secretary-General of the Commonwealth, in London and I was one of the people to meet with Mandela.” 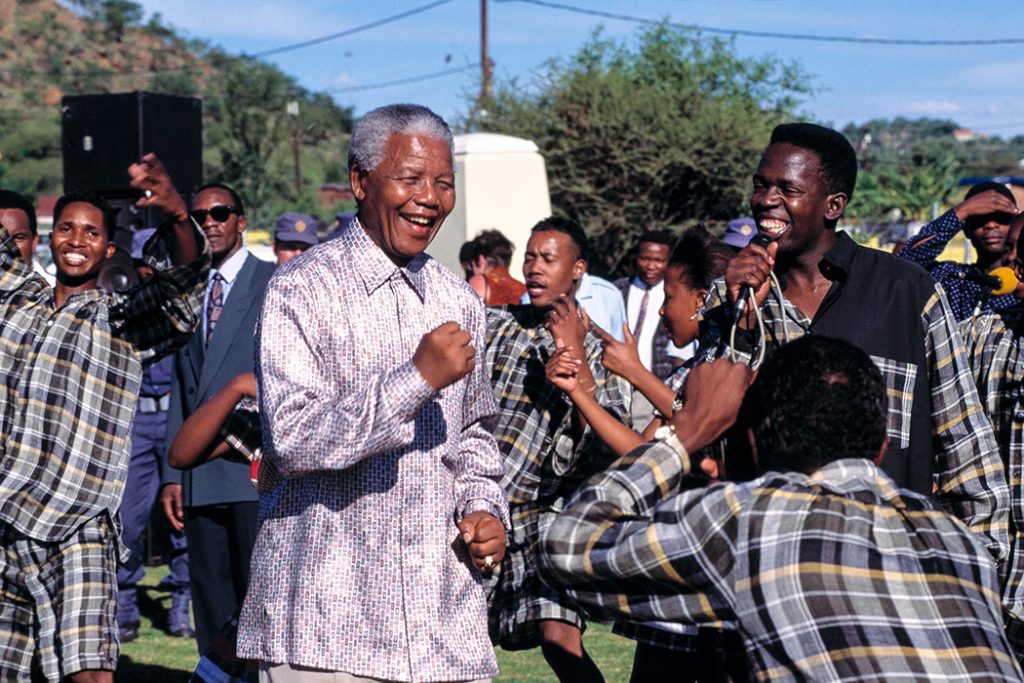 When Nelson Mandela was elected president of South Africa in 1994, Mandla closely observed the mixture of strength and compassion which marked his particular style of leadership. “He could be warm though demanding, disciplined while evincing understanding of human frailties and foibles.”

After stepping down as president five years later, Nelson Mandela continued to advocate for “reconciliation and transformation, which he saw as two sides of the same coin.” In their discussions about his vision for the future of South Africa, Mandla recalls that Mandela always spoke about the struggle being a two-phased process, with gaining political power being only the first of these. “The second phase had to be a greater distribution of wealth and participation by the underprivileged in the economy. He was anxious about the maintenance of continuing stability and social cohesion. Secondly, he sought to roll back the effects of more than 300 years of colonialism and apartheid and knew that the scars were going to remain long after he had exited the scene.”

The passing of Nelson Mandela in 2013 led to a massive global outpouring of grief, but it was the people of South Africa who felt the loss the most deeply. Mandla reflects that Mandela’s death “meant the loss of someone who had been the country’s – if not the world’s – moral standard. He was the mirror in which we gazed to get a measure of our humanity.”

Following Nelson Mandela’s death, the job of finishing his memoir fell to Mandla, a task that took him eleven months to complete. Using Mandela’s unfinished draft as the starting point, Mandla trawled through the many detailed personal notes Mandela had made throughout his presidency as well as a vast amount of unseen archival material. Dare Not Linger: The Presidential Years is a candid account of Mandela’s presidency with many insights into the challenges he faced in his quest to steer South Africa out of the oppression of the apartheid years and into a new democracy. Mandla hopes that those who read this inspirational book “remember how it was possible to solve very difficult problems through dialogue. The time of Mandela did not mean there were no problems. What was different was that the problems did not succeed in splitting us apart.”

Serving as a sequel to Nelson Mandela’s phenomenally successful autobiography Long Walk To Freedom, this latest publication draws its title from the final words of the first: “I have taken a moment to rest, to steal a view of the glorious vista that surrounds me, to look back at the distance I have come. But I can only rest for a moment, for with freedom comes responsibilities, and I dare not linger, for my long walk is not yet ended.”

Mandla further explains that the title “is an exhortation for anyone willing to take up the cudgels that we all cannot wait for others to define our destinies for us. It echoes Martin Luther-King’s ringing cry: Why We Can’t Wait or even Malcolm X’s dictum: ‘When they say go slow, they mean, don’t go.’ Mandela wanted all the people under the yoke of oppression to take a leaf out of the South African book and soldier on.”

Whilst author Mandla Langa has yet to visit Australia, he has nonetheless observed the country with interest. “The history of Australia is the history of the modern world, where the past, if left unaddressed, has the capacity to rise up and become totally uncontrollable. It is a beautiful country with great possibilities.” He also sees links between the plight of many Africans who now reside in Australia, and his own experience of living outside of South Africa. “As someone who was in exile, I am familiar with the condition of being far from home, unanchored. I’m of the view that what helped most of us was international solidarity and the knowledge that minorities become vulnerable if they don’t organise themselves. Since Africans are united by knowledge that they have one common ancestor, it’s always useful for them to seek each other out, organise cultural activities and invite writers and artists from the Diaspora to share with them.”

It was most enlightening talking with Mandla Langa and we appreciate his many insights into the life and times of Nelson Mandela. Hopefully that invitation to visit Australia is in the pipeline. We wish him all the best with Dare Not Linger.

Michelle is an Adelaide-based teacher with a passion for community radio. She teaches radio skills to newly arrived primary school children and presents a weekly music show on Radio Adelaide.

Since the first reports of deaths from the Human immunodeficiency virus infection and acquired immune deficiency syndrome (HIV/AIDS) in the 1980s, advocates and health…