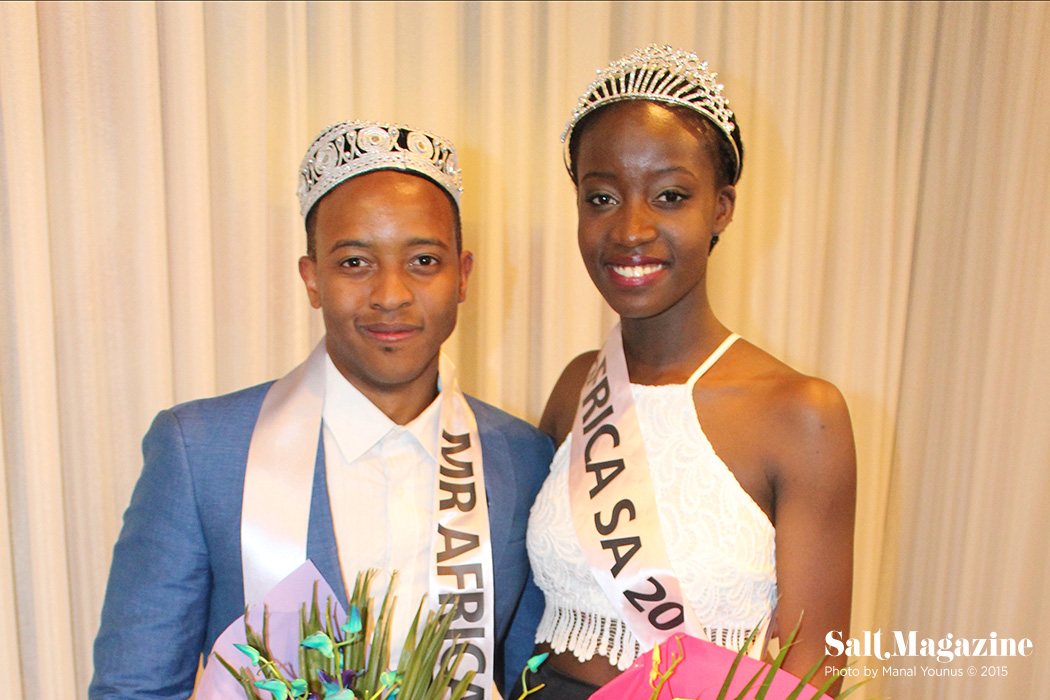 Teah succeeded last year’s winner, Lily Jawi, who is Australian born of Eritrean background. The pageant’s first runner-up was Miss Burundi – Marie-Jeanne Tuyisenge and the second runner-up was Miss Rwanda – Jaqueline Habayimana. In the men’s competition the first runner up was Mr Ivory Coast – Lopez Zubah and the second runner up was Mr. Rwanda – Emmanuel Niyomugabo.

As the first Mr Africa South Australia, Prince Masika said it is a great honour. ‘I honestly didn’t expect to win, it’s unbelievable’. He went on to say, ‘I just wanted to represent Tanzania, because no other contestant was’. As one of the youngest contestants in the pageant, Miss Liberia’s Christiana Teah said she wasn’t expecting the win either. ‘I feel very honoured about winning and I am grateful that the judges chose me’. She also thanked her mother for being there for her. ‘My mother is my biggest supporter and I definitely felt I had made her proud’.

SALT Magazine asked both winners what the future holds for them as South Australia’s current Mr and Miss Africa 2015. Christiana Teah said she plans on focusing on her study. ‘Education is very important to me and my family’. Prince Masika said he hadn’t put much thought to it. ‘This whole thing started as a hobby and now that I’ve won, I’ll definitely continue with modelling but also making sure I finish my undergraduate degree at Flinders University’.

Since it’s establishment in 2009 by Sudanese model Adau Khot, Miss Africa has targeted young African Australian women living in South Australia with hopes of encouraging and opening up conversation on current standards of beauty. This year the 2015 Miss Africa beauty pageant occurred with a twist by introducing male contestants to the event, a twist well received by the audience.

Modelling within the African community isn’t something highly encouraged for both males and females, especially the men, because modelling has always been seen as a female dominated industry. Since the creator of America’s Next Top Model introduced male contestants to their show, the conversation is changing. The planning committee coordinated by mentors Hubert Sola and Jane Erjok were very instrumental in encouraging young African Australian men to join this year’s competition.

Before the start of the show SALT Magazine had a chat with Mr Ethiopia’s Falmay Shehbedin and Miss Nigeria’s Adaora Chikwuba. Both of them have had modelling experience. We asked Falmay why he decided to join this year’s competition, “I initially joined to support my younger sister but the more I got involved, the more interest I gained and decided to go for it”. In a society where judgement is easily passed, Mr Ethiopia didn’t allow that to deter him. “At the end of the day people will perceive you the way they choose to perceive you, it’s what you present that matters”.

Talking about the things she will do if she wins, the beautiful Miss Nigeria, Adaora Chikwuba said she will look at addressing the divide between the young and the old in the African community. “There is a culture shift with African families migrating to Australia and no one is addressing it. The young blame the old for not being understanding, while the old say the young are just being rebellious”. She said it is because these conversations are not happening that the African community is losing young people to underage pregnancy, drugs and alcohol which usually lead to the separation of many families.

This year’s judges were Anna Vlach Fashion Editor at the Advertiser, Laura Adzanku from Relationships Australia and Kristina Crevar from the Migrant Resource Centre. The categories contestants were judged in were Casual, Traditional, Sports and Formal wear. Each contestant was judged on their walk, crowd response and overall performance. In the traditional wear category the girls showed off their beautiful garments and also performed a traditional dance representing their country. This segment was well received by the audience and it was an opportunity for the diversity of Africa to be on display.

SALT Magazines wishes the winners of Miss Africa 2015 all the best and looks forward to interviewing them for our upcoming print edition.

Check out all the photos from the night on our Facebook page.

Phillippa Yaa de Villiers grew up in South Africa’s apartheid regime. Born to a Ghanaian father and Australian mother, she was given up for…