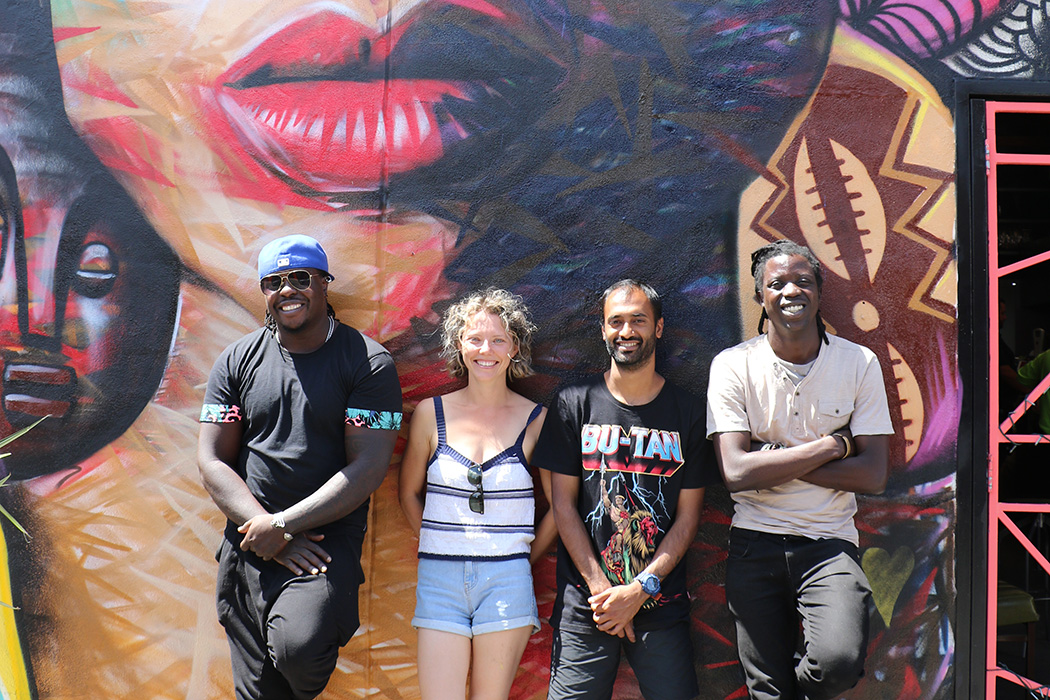 It was while filming a short documentary in East Africa, exploring the power of art as a catalyst for positive change in the community that Adelaide-based Victoria Lewis stumbled upon five of Kenya’s renowned street and visual artists.

Impressed by their inspiring talent, against all odds Victoria did all she could to secure them a spot in the 2017 Adelaide Fringe festival as part of the SANAA: A better world through creativity project.

The event was officially opened by the Governor of South Australia, His Excellency the Honorable Hieu Van Le, at The Bob Hawke Prime Ministerial Centre’s Kerry Packer Civic Gallery – University of South Australia – where some of the artists’ works were displayed.

In his opening remarks, the Governor acknowledged the importance of The Hawke Centre, lauded Victoria for her hard work, and also thanked the artists for their courage in using art to speak their minds.

In what was a dazzling display of skillful and colourful paintings, Eliza Street – an Adelaide city laneway and home of African-themed restaurant Mama Jambo – was transformed into a buzzing, vibrant African bazaar with music, art, fashion and food combined.

After the SANAA Street Festival street party, which went on to win best event for the 2017 Adelaide Fringe, SALT Magazine spoke to three of the artists, Onyis Martin, Wisetwo and Bankslave about their SANAA experience and the drive behind their passion for street art.

There were three things the trio share in common; it was their first trip down under, they started art at an early age, and they have a huge appreciation of their SANAA experience.

Describing his work as thought-provoking, Onyis Martin said what he enjoys about his work is when he sees someone standing transfixed before his artwork. He also likes using numbers to depict society.

“The wall for me is a metaphor for the society. The posters I paste on the wall are about what we are consuming. The numbers are just statistics – 360 will mean this is the 360th girl sold for sex. It became just statistics that can be interpreted different ways. My aim is to remind the viewer that everything is numbered; and people can be managed and restricted on numbers.”

For the softly-spoken Wisetwo, his artwork is open to different interpretations.

“When you look at my work you define it in terms of your perception and your life experiences. Someone else would see a different experience. That’s what I’m trying to convey.”

“I like the process because I learn a lot of things about myself. It kind of nurtures you to be a patient person to get that kind of satisfaction you want as an artist, because you are doing it for yourself first.”

Wisetwo said street art is growing in Africa, but there is a lot more to be done in terms of becoming a force to be reckoned with in comparison to Europe, America and Latin America.

“Africa is a big continent with about 54 countries, so I’d like to see more street art. I think the artist needs to be supported a lot, especially street artists, because they are doing a work that is very difficult, they paint in the heat or in the cold. Even if it’s raining, you have to finish – you can’t take the street wall to the gallery.”

Bankslave said his name reflects the hustles of everyday life – “it’s all about us being slaves to the system.” But when it comes to art it’s all about raising the profile of the African woman.

“I try so much to be biased in favour of the African woman,” said Bankslave. I believe she is the one who keeps us going, keeps our culture and our race going. I try to document her and show people how strong she is.”

An inspiring parting message from Wisetwo for our readers is that we should keep working.

As for the event organiser, Victoria Lewis, it was an awesome event.

“I probably couldn’t have asked for anything better. The guys were really great, and then the Festival went well. The paintings, the response from business, from people, the weather – everything fell into place.

“I hope that we can do it again – sponsors have been positive. I hope there is a bit more support from the Government; and I might also have to find artists from other part of Africa … it’s more about the finance.”

SALT Magazine lauds all the key players who organised the event, and hopes that the SANAA experience will live on to become an annual event.