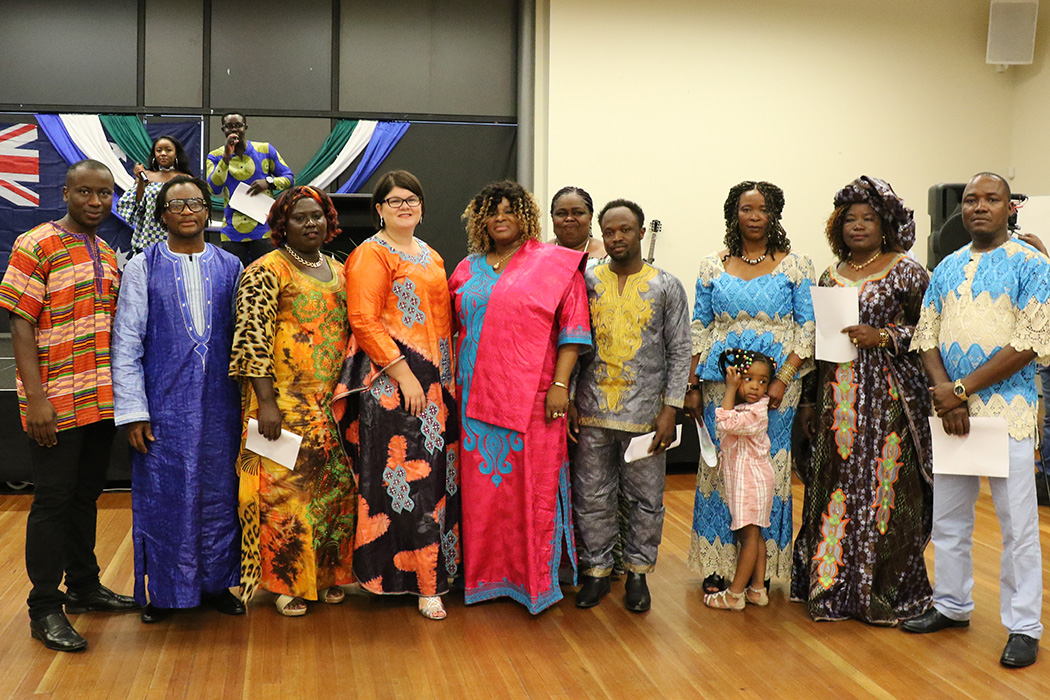 The Sierra Leone Community of South Australia turned out in force to celebrate the inauguration of their first female Community Leader, Mrs Constance Jones, on the 3 March 2017 at the Thebarton Community Centre in Adelaide South Australia.

The event was marked by traditional performances, a colourful fashion display, and was attended by the Minister for Multicultural Affairs the Hon. Zoe Bettison MP and a host of dignitaries and service providers.

SALT Magazine caught up with Constance after the well-attended event for a chat about her new role and the future direction of the Community.

She started off by saying that it is empowering and a good feeling for her as a woman to take on the mantle of leadership of the Sierra Leone Community and to be in a position wherein she can motivate other women and “make them feel that they can do it”.

“It’s just a wonderful feeling being a woman and being able to support my Community; and being that woman [the Community Leader] just adds that extra value to it.”

Migrating to Australia from the UK with her husband and son about three years ago as a skilled migrant, Constance said her new role as a Community Leader is just a natural transition.

“My background has always been in human resources management and people development. I’ve been in that role for over twenty years. Supporting and developing people has always been what I’m about.”

Being head of the Sierra Leone Women’s Group for over a year has given Constance an insight into the workings of the Community.

“It wasn’t easy to bring the women together. I went knocking on doors, talking to them, motivating them and just being positive about it; and, because I’ve already been the Women’s Leader, I can identify some of the issues and get some strategies in-hand as to how I’m going to tackle them, making sure people are included.”

Constance said that after identifying the needs of the Community she will formulate a strategic plan to work towards.

“My ultimate aim is to try and bring the Community together and then deliver those services that they so desire.”

Community leadership is a challenging task that Constance is well aware of and is prepared to take on.

“It’s not always a smooth journey. Everybody has their opinion, needs and experience, and change is not an easy thing. People need time to accept; there has to be evidence of what you can do. They have to believe in you. Once you earn that trust, you can come in. So I’m looking at it as a positive challenge, and it makes me more passionate and confident to try and make that change that I think my community needs.”

Her parting message for our readers is that as a Community Leader she is happy and willing to work with her Community and the general public.

“I consider myself not a leader but a servant. I’m not only focusing on the Sierra Leone Community; I’m focusing on working with the African Community and mainstream organisations to build up that Community connectedness. The Australian Government wants to see us working collaboratively together in partnership, then they can believe that we all want that same change.”

SALT Magazine appreciates having the opportunity to talk to Constance. We wish her all the best steering the Sierra Leone Community into a new chapter.

It’s the Morning Tea break, and we’re all slowly making our way to the Dining area to help ourselves to some treats. I’m attending…