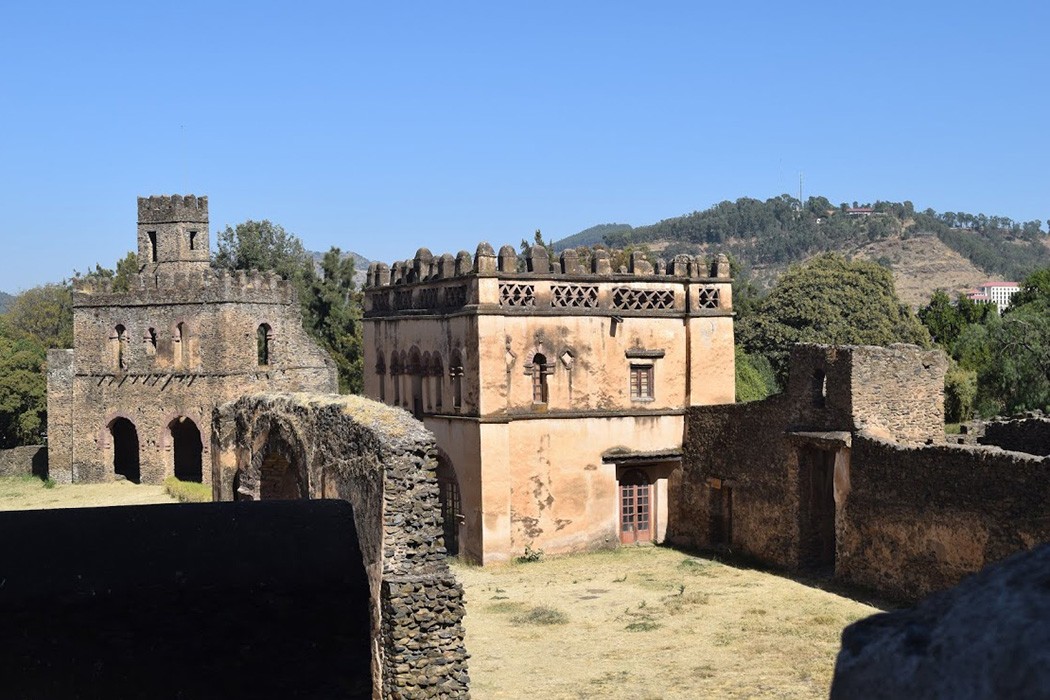 The first time I saw the castles, we were standing on the grounds of a hotel situated high up on a hill overlooking the entire city of Gonder, northern Ethiopia. It was through binoculars. They were beautiful, old, ruined. Jamal, a family friend, a local, told us they were several hundred years old. He told us they would use eggs to help glue the bricks together.

When I entered the site, I treated it like a playground. Running from castle to castle with my camera capturing different angles in different shades of light. I felt like I stepped back in time.

The castles looked like the castles in all of the old English films I watched about King Arthurs and Lancelots. They were the kind of buildings that you would expect to be attributed to colonialism. However, not only was the attempted colonisation of Ethiopia unsuccessful but these buildings predate African colonialism.

I touched the bricks of the walls and the cracks between them, the timber of the tall doors, the clay torches. And at one moment when I looked around and realised I had lost my family amongst the ruins, I took a moment for myself. I breathed in the air. This is African history. This is my history.

These castles were just a glimpse of what did and could have continued to exist and progress without the steroid that was colonisation, which has had such severe side effects.

I had never entertained the argument I had heard so often about how colonisation was good because it brought progress and infrastructure to African nations. This was because history has shown us that such growth happens through communication between civilisations through trade, exploration and education without necessarily engaging in something so destructive.

While I already understood that there is a world of African history to explore, to see it in front of me for the first time, I was reminded that my family’s history -before the false democracies, before the communists took our homes and starved our people, before the Italians began to build their buildings in front of our homes – is rooted so deeply in the earth that we are still to discover it.

Nigeria and Zimbabwe are about to meet in Australia for the African Comedy Festival, organised by IAMIKE Entertainment. Featuring Nigerian comedian BASKETMOUTH and Zimbabwean…