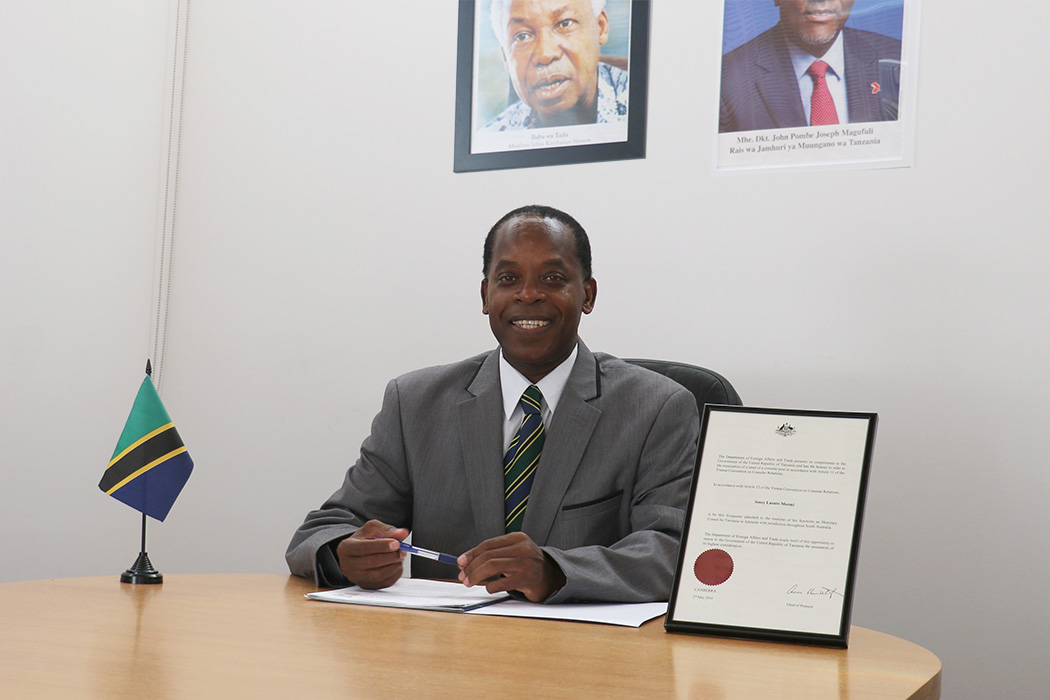 The demanding challenges of settlement over the past decade have left African Community leaders and elders with little time to nurture special relationships between South Australia and their country of origin.

Recently SALT Magazine learned that Tanzanians in South Australia, though one of the smallest community groups, have a Consulate which has been in operation for over six years. The Consulate protects the interests of Tanzanian citizens who are temporarily or permanently residing in South Australia. It also assists companies to invest, import and export goods and services to their home country and to their host country.

We spoke to Tanzanian Honorary Consul, Mr Sossy Msomi, about his role and his experience representing his country in South Australia.

Mr Msomi said he came to Australia over 22 years ago as a skilled migrant specialising in Quantity Surveying with his young family.

“We chose Australia because, at the time, my wife’s sister was undertaking her PhD studies at Flinders University; and after a visit we thought it would be a good place to raise our children.”

In his early years, Mr Msomi spent a considerable time in Singapore working for an Australian construction company. After a five-year stint he returned to South Australia and joined his current company Ceiling and Wall Contractors which deals with internal building fitouts, specialising in partitions and ceilings in major commercial projects.

Mr Msomi was appointed for the role of Honorary Consul by the Tanzanian Government in May 2010.

Despite being the first Consul for South Australia, Mr Msomi said the Tanzanian Government already had Consulates in Melbourne, Perth and Sydney.

“Australia is huge, and we do not have a High Commission in Canberra. Obviously the linkage between Tanzania and Australia is still very important, and therefore there was a need to set up Consulates in different states so that the linking factors between the two countries can be maintained and strengthened.

“We process and issue visas, help with travel arrangements, provide advice to people wanting to start a business, and also help Australians who have worked in Tanzania and need police clearance certificates. Our Consulate is the basic link between our two countries and Governments.”

There are a number of South Australian businesses operating in Tanzania such as the Adelaide-based company Beach Energy Ltd which is involved in petroleum exploration in Lake Tanganyika, the oldest and deepest lake in Africa.

Mr Msomi said that early in his appointment he had to help an Australian family fulfill the wish of a deceased relative.

“The couple had been living in Tanzania for many years and unfortunately the wife contracted cancer, fell sick. When her cancer had progressed, she opted to come back to Australia for specialised medical attention. The lady passed away, and in her will she wanted her ashes to be scattered in the Serengeti and other National Parks in Tanzania.

“The family did not know how to get the ashes to Tanzania. However, when they found out that there was a Tanzanian Consulate here, they came to me, and I was able to help them fulfill the wishes of the deceased and send the ashes over.”

An active and founding member of the Tanzanian Community Association of South Australia, Mr Msomi works closely with his Community to celebrate or commemorate Tanzanian national days together.

Asked about his thoughts on the African Community in South Australia, Mr Msomi said he was worried over the tendency for some in the Community to forget about Africa.

“If you look at the English, Greek or Italian Communities, they have strong connections with their countries of origin, and they have been here for much, much longer. I would urge all Africans not to forget where we came from. We should help Africa; it is our duty.”

He urged parents to make sure that the younger generation did not lose their link with Africa.

“Maintaining a strong connection will foster business ties between Africa and Australia in the near future.”

It was great talking to the Honorary Consul. We wish him all the best, and we hope to see other African Community leaders working towards that same vision to strengthen relationships and linkages between our host country and countries of origin as it is a win for all in the changing fortunes of these times.