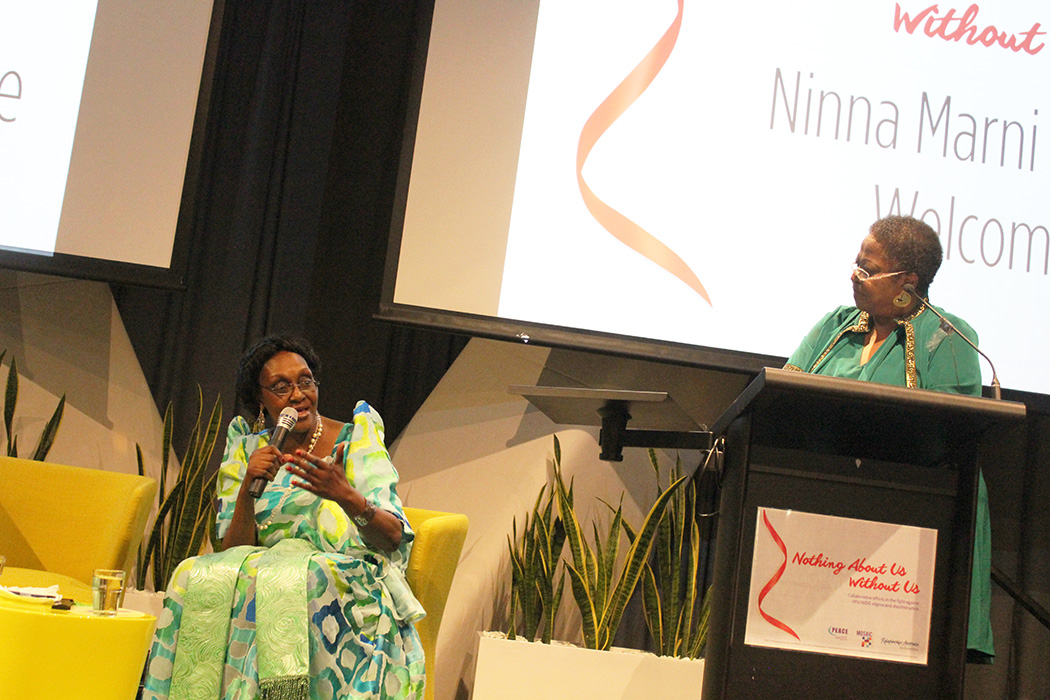 Since the first reports of deaths from the Human immunodeficiency virus infection and acquired immune deficiency syndrome (HIV/AIDS) in the 1980s, advocates and health professionals have worked hard to reduce the soaring death rates and infections caused by the disease.

The African continent was the hardest hit by this devastating pandemic as millions of people succumbed to the disease.  Cultural factors in Africa, including gender inequalities, polygamy, FGM and patient stigmatisation makes it a confronting and traumatic experience for those affected.

One of Uganda’s renowned HIV advocates, Dr Lydia Mungherera was in Adelaide as a guest speaker in ‘Nothing About Us Without Us’ – an interactive workshop organised by PEACE Multicultural Services of Relationship Australia SA, Statewide CALD DV Service and Shine SA to talk to workers on highly stigmatised issues and provide them with an opportunity to learn about stigma and discrimination from culturally diverse viewpoints.

SALT Magazine had a sit-down interview with the doctor to talk about her experience contracting the virus in Africa and gain an insight on how she overcame the odds and became an inspiration for others.

Before contracting the virus, Dr Lydia was living a normal life in South Africa. “I was living a very vibrant, very active life.”

The doctor said she doesn’t know when she contracted the disease but is aware that she has been living with it for the over 25 years now. She said she started feeling sick late in late 1996 and her condition worsens rapidly and being a doctor she became suspicious.  “I know the signs and symptoms so as my condition worsened my colleagues got worried, I wasn’t conscious when I was tested.”

It was a harrowing experience for the doctor who had two young children to look after. She said she was devastated and felt terrible, depressed, confused and sick. “I questioned why me and started wondering when did it happen, as I have been faithful to my husband, I thought that was the end of my life because at that time there was no treatment.”

The doctor said support from family and friends played a key role in providing her both comfort and the courage to carry on despite many challenges. “People look at you and think you are crazy, and not everybody accepts you, and you wonder what that person is thinking, it’s a bit of a self-stigma, it’s just a feeling of hopelessness, would I be able to work again? Most likely not, I went into depression.”

But the fighter she was will not give in. “My biggest way of overcoming it was by joining support groups, a network of people who live with HIV and I thought to myself that I’ll declare my status and make a difference in somebody’s life. That helped me through it and my own positive attitude which I had before I was sick came back.”

“I embarked on building other people’s coping skills and went to work with The AIDS Support Organization (TASO) which was the first AIDs organisation set up in Africa. I saw people dying hopelessly; there were no drugs, so I started looking for drugs and treatment to help people.”

“I think my global advocacy and my openness and frankness really helped me, I was able to comfort people who are stigmatised and went around telling people that nobody goes out there looking for the virus.”

The doctor said poor people were and are the most affected. “What’s the use of encouraging people to stay alive when they can’t feed their children and themselves”?  She said sustainable livelihood programs go a long way in addressing the underlying causes. She expressed her admiration over the courage of the Ugandan women who against all odds are combating HIV and rebuilding their lives.

“If I have money I’ll give it to these women and say do something because they got themselves together, collected money amongst themselves and formed the Mama’s Club group.”

According to Dr Lydia, health centres are full of women while men due to macho and cultural sentiments distance themselves from the programs, “Do they go test for high blood pressure and diabetes, do they go check for anything else?”, she asked hypothetically, “and that’s why we need a men’s group, we need to mobilise the men” she said.

The doctor said she would like and will be asking the African communities Council of SA to form a Men’s group comprising of not just men with HIV but men who are determined to go out there and raise health awareness.

“I think routine testing should occur in all health centres and people should be encouraged to offer for testing.”

Dr Lydia’s parting message is for South Australia’s African community to stick together, look for solutions and create that critical mass and advocacy voice.  She said the community should remove all forms of stigma and discrimination and support anybody who has tested positive with HIV and not “point fingers”.

It was great talking to the Doctor and SALT Magazine appreciates the opportunity to meet her and want to thank her for sharing her story and experience with us.

The South Australian Police African Liaison team was set up over four years ago to improve relationships between South Australia’s African Community and police….